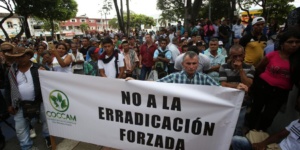 April 24 marked the 30th day of Colombia’s nationwide quarantine declared by the national government, enforcing strict “stay at home” orders for non-essential workers which greatly limited the movement across city and departmental lines for international observers verifying the implementation of Colombia’s historic 2016 peace agreement. As the  Colombian government ceased the moment of crisis to begin ramping up the militarization of public spaces, particularly in the countryside, U.S organizations and activists voiced their concerns over a move towards authoritarianism under the excuse of combating the COVID-19 pandemic while failing to deliver any substantial relief to the most vulnerable Colombians or guarantees to at-risk communities and human rights defenders. According to Colombian think tank Indepaz at least 71 social leaders have been murdered in 2020 with at least 20 more since the quarantine began in March.

On March 19th, Marco Rivadeneira, an emblematic leader who promoted the substitution of illicit crops in the department of Putumayo and was looking for alternatives for those who had remained outside of crop substitution programs was assassinated. According to the National Coordination of Coca, Marijuana and Poppy Farmers (COCCAM), the murder of Marco Rivadeneira raises the number of members of COCCAM killed for leading illicit crop substitution processes in Colombia to 60. Three days after Marco’s assassination, members of the Colombian security forces arrived to begin spraying coca crops with glyphosate.

On March 26th, members of the U.S-backed Colombian armed forces began forcibly eradicating coca crops in the community of Santa Teresa, Norte de Santander. Members of the community resisted these forced eradication efforts as they were in clear violation of the collective substitution agreement signed by the community in September of 2017. Hours later, the body of t22-year-old social leader, Alejandro Carvajal, laid lifeless on the ground after being extrajudicially murdered by a member of the Colombian armed forces’ special Vulcano Task Force, according to local human rights organizations.

On Wednesday, April 22, in an Indigenous community in rural Tumaco, Nariño in southwest Colombia, public security forces killed 35-year-old Ángel Artemio Nastacuas Villarealone, a member of the Awa Indigenous community, and injured three others who were peacefully protesting a police operation to manually eradicate coca plants. Members of the police eradication team fired into a group of Awa Indigenous people, who were attempting to talk to them about why Indigenous authorities hadn’t been consulted about the planned eradication, as required by law.

The Colombian government, under intense pressure from Washington, has increased its forced eradication operations, violating their own social distancing orders increasing the risk of spreading COVID-19 in communities with little to no access to healthcare. Since the nationwide quarantine began, the Colombian armed forces have carried out forced eradication operations in at least seven different departments, leading to serious human rights violations that have not been fully investigated.

The intensification of Colombia’s forced eradication program comes less than three years after the massacre of 7 campesinos after members of Colombia’s National Anti-Narcotics police fired indiscriminately into a crowd of peaceful protesters in Tandil, Tumaco. So long as the Colombian government continues to ignore the collective agreements signed with small-scale coca farmers and fails to address the root causes of poverty and violence in the Colombian country-side, another Tandil massacre is only a matter of time.

Due to the clear links between militarized anti-narcotics policies and serious human rights violations, we call on the U.S and Colombian governments to: