On June 20, 2022 a Honduran court finally presented the written verdict in the case against U.S. trained former military intelligence officer Roberto David Castillo for the murder of Berta Cáceres, sentencing him to 22 years and 6 months in prison. Laura Zúniga Cáceres, Berta’s youngest daughter explained, “This is an important advance but the masterminds of the crime are still enjoying impunity thanks to their political and economic power. As victims of this crime, we, her family, members of Copinh and the Lenca people will continue demanding justice from the Honduran state.”

COPINH published a communique naming members of Honduras’ powerful Atala Zablah family as the intellectual authors of Cáceres’ murder. Castillo was the CEO of hydroelectric corporation DESA which was attempting to build a hydroelectric project opposed by Berta Cáceres. However, the majority owner of DESA at the time of Cáceres’ murder was a company owned by members of the Atala Zablah family. Three Atala Zablah brothers were DESA Board members. The son of one of them, Daniel Atala Midence, was DESA’s Chief Financial Officer. Atala Midence was called to testify as a witness in the murder trial by the Cáceres family’s lawyers but avoided testifying after state prosecutors stated he was under investigation for the murder. While he may technically be under investigation, COPINH denounced that state prosecutors “have not made a single real advance identifying the intellectual authors.”

Indeed, it seems the Honduran Public Prosecutor’s Office has attempted to avoid finding intellectual authors responsible for the murder of Berta Cáceres. The Public Prosecutor’s Office has very notably failed to present evidence about where the money to pay for Cáceres’ murder came from. They did not even present a proposal to the court to have a financial expert examine the finances of David Castillo and related companies, despite the fact that the first murder trial made it clear there were several corporate entities that paid the salary of one of the men convicted for the murder.

While the Honduran Public Prosecutor’s Office has failed to follow the money, an investigative report released today in The Intercept documents how the Dutch Development Bank (FMO) repeatedly sent money that was supposed to go to a contractor building the Agua Zarca Project to a company founded by David Castillo, CONCASA. Castillo awarded administrative power of CONCASA to Daniel Atala Midence. The Intercept describes how Atala Midence and Castillo filed requests with FMO for money to pay a construction company but with transfer instructions to CONCASA. FMO sent the money to CONCASA via Deutsche Bank in New York City; both banks processed the transaction despite the huge red flag that the company listed as the payee did not match the company receiving the money.

The article reports that one of these payments, for just over $1.7 million, was requested by Atala Midence on February 23, 2016, and sent just two days before Cáceres was murdered. Also two days before the murder, Castillo messaged Douglas Bustillo — who coordinated with the hitmen that would murder Berta — about meeting up the next day to provide him with money. Read more here.

Prosecution of all the intellectual authors of her assassination is just one way that justice systems around the world are in debt to Berta Cáceres. Any and all financial crimes by those connected to the Agua Zarca Project must also be prosecuted. As Ron Rosenhart Rodriguez, one of COPINH’s lawyers in the Netherlands, told The Intercept, the documents “demonstrate that there are still several lines of financial investigation open for the Honduran, Panamanian, Dutch, and even US authorities to research.”

The day after David Castillo was sentenced for Cáceres’ murder, COPINH protested in front of Honduran Bank BAC Credomatic, where Jacobo Atala Zablah is Executive President. Jacobo Atala Zablah was also Vice President of the DESA Board of Directors and partial owner of DESA through a family investment company. COPINH also protested at the Central American Bank for Economic Integration, another bank that financed the Agua Zarca Hydroelectric Project, and where a Board member of DESA, Jose Eduardo Atala Zablah, was formerly the Honduran director. Finally, Bertha Zúniga, Coordinator of COPINH and daughter of Berta Cáceres met with Honduran President Xiomara Castro to present proposals to advance justice for Berta Cáceres and the rights of the Lenca people.

While the Honduran Public Prosecutor’s Office may still be unwillling to investigate and prosecute members of Honduras’ economic elite, in the words of Berta Cáceres herself, “they have believed that impunity is eternal but they are wrong. The people know how to do justice.” COPINH has shown time and time again that is true. 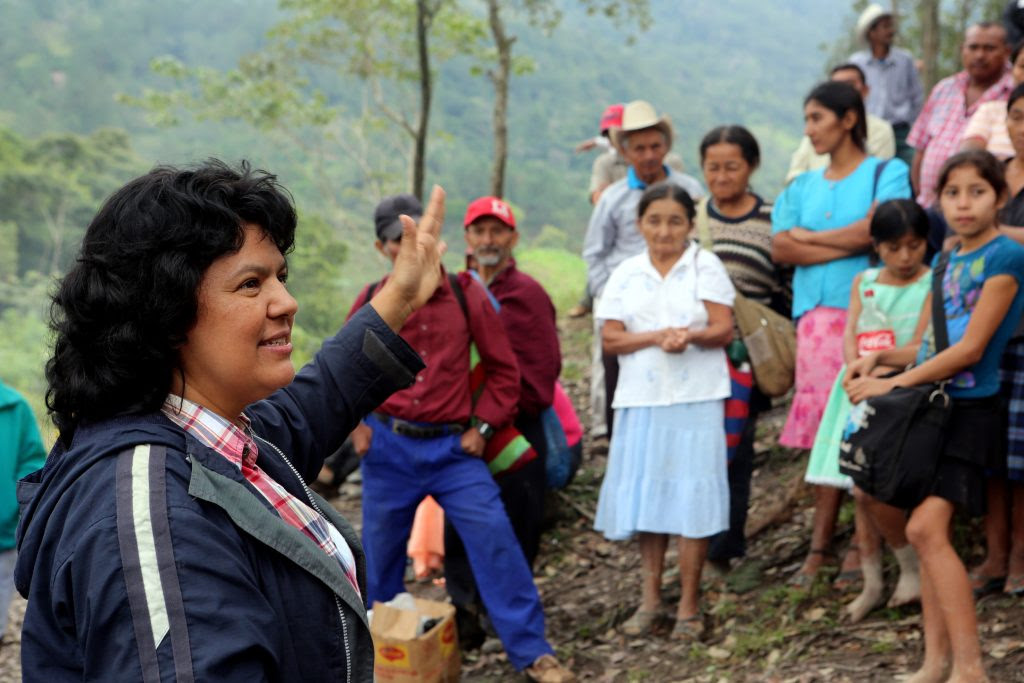