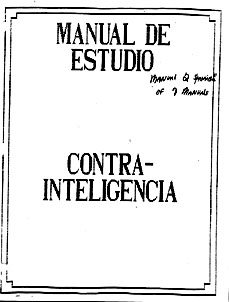 On September 20, 1996, under intense public pressure, the Pentagon was forced to release training manuals that were used at the School of the Americas for years. These manuals advocated torture, extortion, blackmail and the targeting of civilian populations. A Washington Post article by Dana Priest broke the story.

The release of these manuals proved what SOA Watch, thousands of Latin Americans and numerous human rights organizations had been saying for years: that U.S. taxpayer money had been used for the teaching of torture and repression.

Material from CIA and Army manuals written in the 1950’s and 1960’s was incorporated into these seven Spanish-language training guides. More than a thousand of these manuals were distributed for use in countries such as El Salvador, Guatemala, Ecuador and Peru, and at the School of the Americas between 1987 and 1991. An inquiry was triggered in mid-1991 when the US Southern Command evaluated the manuals for use in expanding military support programs in Colombia.

In March 1992, then-Secretary of Defense Dick Cheney received an investigative report on “Improper Material in Spanish-Language Intelligence Training Manuals.” Classified SECRET, the report noted that five of the seven manuals “contained language and statements in violation of legal, regulatory or policy prohibitions” and recommended they be recalled. The memo is stamped: “SECDEF HAS SEEN.”

Click here to read and download a timeline about the creation of these CIA and Army manuals.

The National Security Archive ran released their declassified documents dealing with all of the manuals in May 2004, after the Abu Ghraib scandal put torture at the hands of U.S. and U.S.-trained soldiers back in the news. Read “Prisoner Abuse: Patterns from the Past” here.

The New York Times ran an article about the manuals’ content, with excerpts, on October 6, 1996.

Finally, read the manuals themselves below:

In English and Spanish. The translated, English-language manuals are available here in HTML format only. The Spanish-language manuals are available here in both PDF and HTML formats. The PDF’s are scanned images of the original manuals. Click on “html” to view them online, or click on “pdf” to download them. You wil need Adobe Reader to download them. Click here to download it for free if you do not already have it.

Click here to read the The 1992 investigative secret report sent to Cheney about the use of the Army manuals at the School of the Americas.

Click here to read the declassified memorandum of a conversation with a Southern Command officer, Major Victor Tise, who was responsible for assembling the Latin American manuals at the School of the Americas for counterintelligence training in 1982.

The preceding CIA manuals are availabe online through the National Security Archives. To view and read these documents in PDF format, click on the links below: