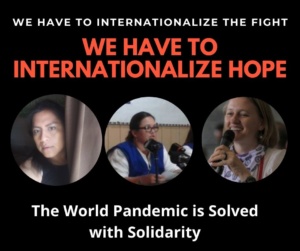 Early in May, the “We are Abya Yala-We are One America” platform organized a virtual discussion on “Pandemic, Migration and Solidarities”, moderated by Sneither Cifuentes. Three voices, three women, were able to share their analysis, their struggle, their hopes in the midst of this context of pandemic, injustice, and at the same time solidarity among peoples.

Karla Bautista Chonay, coordinator of the Trans Queer Pueblo Liberation Project, a transgender woman, shared that she lived in Petén, Guatemala, and that “my mother taught me to fight, to organize with the other indigenous women in my town to defend ourselves against the genocide that was happening in my country, – later, I fled violence and homophobia, by migrating to the US in 2005 to realize my dream. ” However, “I was detained and put in cold cells before I was deported to Mexico.”

In 2017, in another attempt to enter the United States, she recalls that when she applied for asylum, “when I presented myself in migration, I met a homophobic, racist officer who refused to speak about my gender and community, ending the interview. That was what gave me the courage and strength to connect with the liberation project” and “I joined the fight to speak out, develop leadership, and spread awareness for my LGBT, migrant, community of color. “

“Today I am not speaking from Peten, Guatemala, but from a far more arid land and much further north: Arizona. Twice conquered – once by Spaniards and later by gringos. In this land we live a violent racism, the result of the invasion of the Anglo-Saxon people “, says Karla.

Currently living in Phoenix, Karla takes a moment from telling us her story to wonder out loud, what it means to live as descendants of native American people and also as people of the third gender or LGBT in the midst of a pandemic? Her answer speaks volumes and is the mirror that reflects injustices: “It means that our state is militarized, that borders are controlled and monitored, and that our people are persecuted, and imprisoned, in the midst of a pandemic. It shows that we are considered cannon fodder during disasters, without any right to protection or shelter, as shown by the conditions in detention centers. ”

During the current pandemic, Karla reveals that “there is a health disaster in detention centers, with medical negligence” and points out that “the abuses are not just the presence of aggression but also the absence of medical care”.

For Solidarity In The Health System

Marcela is also part of the National Committee for the Support of Indigenous Autonomy in her country, the Right to Protest Collective, SOAW CR and the Somos Abya Yala Platform.

Marcela tells us that for some years now they have been following the militarization of the police forces: “Everyone knows that Costa Rica has not had a formal army since 1948, however in recent decades there has been increasingly more military training by the Ministry of Public Security and the Police Investigation group, which functions like the Judicial Police in some countries. ” She points out that the police “are receiving training at WHINSEC, which is known as the School of the Americas; they receive training from Chilean police the Carabinerios, and from Colombian, and Salvadoran instructors with the guidance of the US Southern Command. ”

Under the current pandemic we have seen the collapse of the health systems of many countries of Latin America and the world, Marcela reminds us that “most of us who are in the struggle, defending of society, were very much aware that this was going to happen. When we look at this pandemic, those of us who have fought for a universal health system that includes everyone, we knew that the current health system was not going to be able to respond, and that was indeed what happened. We have a health system that for decades has been attacked by governments trying to privatize parts or all of it.”

Within Capitalism There Is No Solution for The Pandemic

“We have no doubts that the international struggle of the people, now more than ever, is necessary, urgent and legitimate,” says Soniamara Maranho member of the national coordination of the Movement dos Atedidos por Barragens (MAB- Brazil) organization that is part of the Movement of those affected by Dams in Latin America – MAR

Soniamara remembers the collapse in 2015 of the Fundao dam and the tragedy of Brumadinho in 2019, both in the state of Minas Gerais (southeastern Brazil); there,“two dams collapsed and almost 300 people died. In 2015 there were 20 people and last year, 2019, there were 272 people dead. ”

Regarding the current situation, she says that unfortunately Brazil has followed Trump’s and the United States, capitalist ideology, and as a result both countries “have the worst pandemic results.”

She points out that the current crisis we are experiencing “falls on the backs of the workers, the poor, women and blacks, internationally as well as in Brazil.” They are the ones who feel the cruel impact of a society based on profit, based on capitalism.

“Immigrants, women, youth, LGBTI, are the ones who suffer the most because they cannot pay for healthcare which is for profit ” and, in Brazil, “Bolsonaro is committing an institutional crime by not following the WHO’s suggestions.”