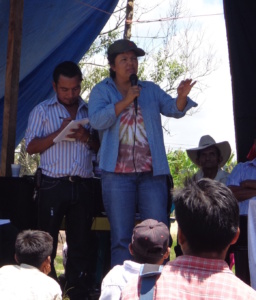 Today, as we mark 5 years since Berta’s assassination, we honor and remember her and her extraordinary life and legacy. Berta was someone who refused to be silent, who refused to cede or go into exile despite the violence she was up against. She was extremely clear about the causes of the injustices of the world and did not hesitate to name those responsible. Her ability to explain and relate complex global phenomena to everyday realities made her an exceptional leader, and the dignity with which she treated every person she met made her a phenomenal organizer. She was a compelling and strategic speaker who made the connections between struggles seem obvious and imparted wisdom as she energized those who listened.

And while she has become a global icon, Berta was also a friend, a mother, a human. I miss her joy in the midst of struggle, her laugh, the late night talks and the stories as we tried to stay awake driving the dark, foggy road to La Esperanza after an exhausting day. She taught me so much, including about the importance of joy even in the most difficult of situations, about the power of joy and laughter when confronting death and destruction. I will forever be grateful to her for that, for her friendship, and for her grit and determination to continue forward no matter how hard the road towards justice seemed.

As we commemorate Berta Cáceres today, her organization COPINH invites us to join a Twitterstorm demanding justice for Berta with the hashtags #JusticeForBerta / #JusticiaParaBerta and #5YearsWithBerta /#5AñosJuntoABerta. Tag @COPINHHONDURAS and @SOAWATCH too! You can also tag your Senator and ask them to co-sponsor the Honduras Human Rights and Anti-Corruption Act.

COPINH also invites everyone to a virtual concert this evening in Berta’s honor starting at 5pm Pacific / 8pm Eastern with over a dozen musicians from all over Latin America and more, including Karla Lara and Rebeca Lane. The concert will be streamed on COPINH’s Facebook Page and Youtube channel.

Last but not least, a Honduran court announced yesterday that the trial against Roberto David Castillo, a former Honduran military intelligence officer and the CEO of the DESA company, for Berta’s murder will take place April 6-30th. Castillo is the only intellectual author charged to date; we continue demanding that all those responsible are brought to justice.