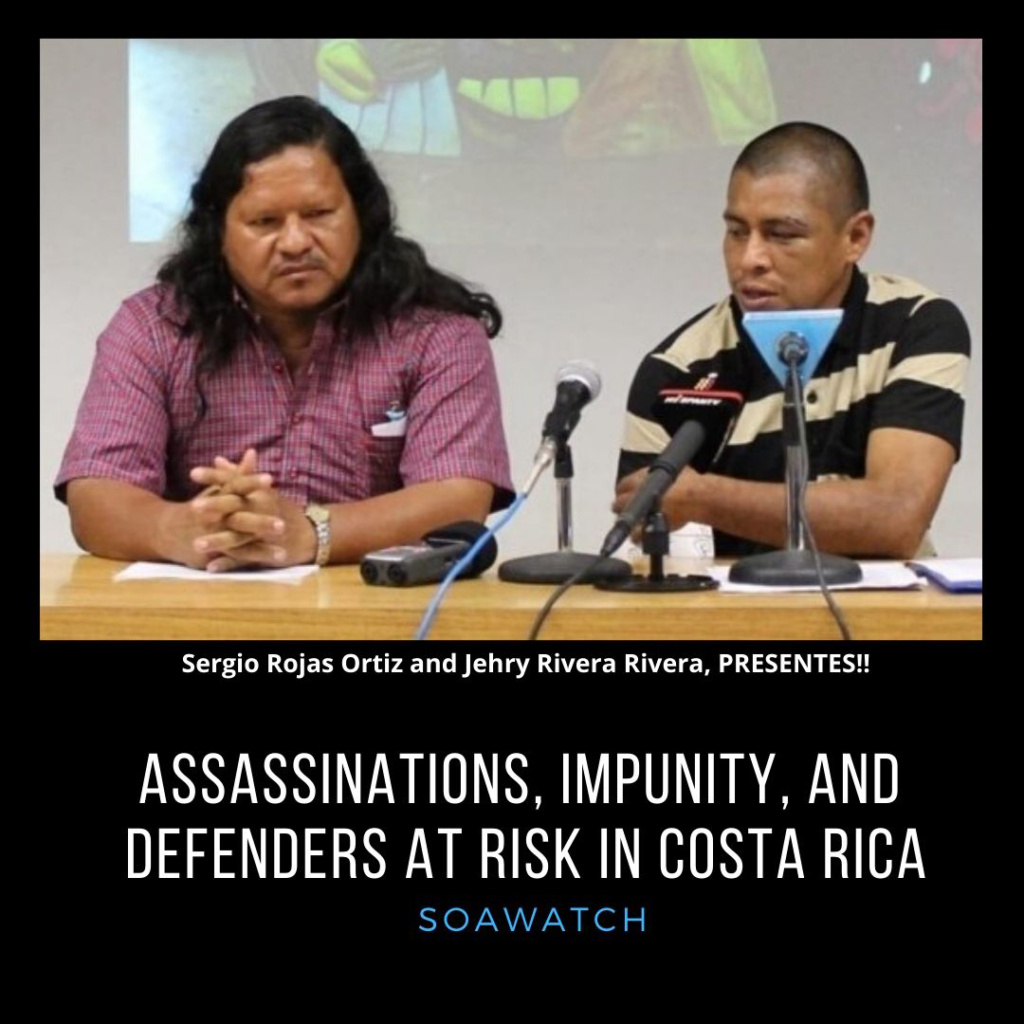 In spite of a 1977 law that recognizes 24 indigenous territories are exclusive to the country’s eight indigenous groups, indigenous people have been fighting for decades against the illegal occupation of their territories. In 2012, after the Costa Rican government failed to apply the 1977 Indigenous Act as well as eviction decisions in the community’s favor, Sergio Rojas led members of the Bribri people to peacefully occupy their ancestral lands. Since then, Sergio Rojas and other indigenous people and leaders faced harassment, threats, and assassination attempts from non-indigenous landholders.

Because of these constant attacks, and the lack of an effective State response to protect the indigenous communities, in 2015, the Inter-American Commission on Human Rights (IACHR) issued precautionary measures on behalf of Sergio Rojas Ortiz and the territorios of Salitre and Térraba to guarantee the lives and physical integrity of the members of both peoples. Unfortunately, these measures were insufficient to protect Sergio Rojas, who was assassinated in his home the same day he had reported new threats against his life to government officials. According to the National Front of Indigenuos Peoples (FRENAPI), “the lack of the effective application of these measures by the Costa Rican State/government, manifested itself in its incapacity to safeguard the life of Sergio.

Even after Sergio’s assassination, the government of Costa Rica has failed to take the necessary steps to effectively protect indigenous people. To date, the material and intellectual authors of this crime have not been brought to justice, and, on February 24, 2020, an armed mob attacked and killed Jehry Rivera, an indigenous rights defender from the Brörán indigenous people, who was also peacefully occupying ancestral land. In addition to these deaths, FRENAPI denounces “there are direct assassination threats against our compañeras/os recovering [indigenous lands] from various Territories, in particular Térraba, Salitre, Cabagra, and China Kichá,”and that “malicious posts that incite hatred and ethnic violenc have circulated in certain media outlets and social media, as well as campaigns against human rights activists and defenders.”

Last week, the radio program “A desalambrar,” part of the “Somos Abya Yala, Somos una América” platform of which SOA Watch is a member, interviewed human rights defender Marcela Zamora Cruz, from the Centro de Amigos por la Paz (CAP) in Costa Rica. Zamora Cruz strongly criticized the Costa Rican government and President Carlos Alvarado Quesada, who “only condemn these assassinations and don’t do more than issue a statement.” “We have demanded clarification from the State of Costa Rica and the weeks pass and we do not see actions to stop this violence against indigenous people,” she said, also stating, “our brothers and sisters are also being threatened on social media. They are saying, ‘these are the ones responsible for the violence in indigenous territory,’ but these are the organizations working for indigenous peoples’ rights.”

According to information from CAP, defenders who have received threats include Pablo Sibar, an indigenous leader from Térraba, coordinator of FRENAPI, beneficiary of precautionary measures from the IACHR, and close companion of Sergio Rojas Ortiz; and Clarita Quiel, Bribri indigenous leader from the Indigenous Territory of Cabagra, and member of the coordination of FRENAPI. She assures they are not the only ones at risk, as there is a “black list” of more than thirty indigenous people who are at risk.

Human rights defenders, and members of organizations accompanying indigenous struggles in Costa Rica are also being threatened, harassed and unjustly defamed as “those responsible for the violence in indigenous territories.” These include Gustavo Cabrera Vega, Servicio Paz y Justicia (SERPAJ) Costa Rica and National Committee of Support for Indigenous Autonomy; Marcela Zamora Cruz, CAP and member of the National Committee of Support for Indigenous Autonomy;  Reiner Canales, leader of peasant (campesina) struggles in the south in the Changuena and Térraba farms, member of the board of the Costa Rican Human Rights Association (ACODEHU) and of the Coordinator of the South-South Struggle. Gustavo Oreamuno Vignet and Jeffery López Castro, members of the Ditsö Association of Popular Initiatives have also received threats.

In light of the increased violence against indigenous activists in Costa Rica, the ineffectiveness of the State’s protection measures, and the apparent lack of political will to address the illegal occupation of Bribri and Brörán ancestral lands, on February 25, SOA Watch sent a letter to the Costa Rican Ambassador to the United States, Fernando Llorca Castro. In this letter, we expressed “our extreme concern for the life of human rights defenders and indigenous peoples in Costa Rica” and requested “to be informed of the steps the government of Costa Rica is taking to bring the authors of these crimes to justice and guarantee the full respect of human rights as required by international treaties on the matter.” To date, we have not received a response from the Costa Rican Embassy in the United States.

The struggle for the rights of indigenous peoples, their land, their languages, their autonomy, and for their culture, extends from the south, from the lands of the Mapuches, to Alaska, across our Abya Yala. We express our condemnation of the assassinations, the persecution and the criminalization of the indigenous cause. We reaffirm our support for the legitimate demands and struggles of our original peoples.

In its statement, FRENAPI recalls “land/territory is transcendental for indigenous peoples. According to our worldview, water, land, the air, the rivers, trees, and natural resources are key for our Buen Vivir. These elements are intertwined spiritually and are sacred, for the healthy use and harmonious coexistence between people; thus, they are not objects of commerce.”