The White House put out a statement last week in which Vice President Harris announced “more than $1.9 billion in new private sector commitments to create economic opportunity in northern Central America” as part of the so-called U.S. Strategy to Address the Root Causes of Migration. As we have shared before, this strategy promotes corporate interests at the expense of the majorities and replicates the same type of policies that have contributed to migration in the first place. A quick look at just a few of the corporate “commitments” announced by VP Harris this week illustrates this.

Two of the commitments are from apparel companies, Gap and SanMar (an apparel wholesaler), which the White House celebrates will increase their sourcing from Honduras and Central America to reportedly create 9,000 jobs in the textile industry… also known as sweatshops. History shows that the low-wage jobs created by U.S. apparel companies have not and will not stop migration. An exposé by Sofi Thanhauser published in The Guardian earlier this year, “Behind the label: how the US stitched up the Honduran garment industry,” illustrates how “US corporations and the US state department have worked together for decades to bring cheap garments to American consumers, framing job creation as a blessing for the Honduran economy while simultaneously engaging in political interventions that keep Honduran citizens poor.”

The Collective of Honduran Women (CODEMU) stuggles for justice for the women affected by repetitive motion injuries and other abuses in Honduras’ textile industry, including workers being fired after sustaining injuries as a result of repeating the same motion over and over at a fast pace during long shifts. In the words of a recent exposé, Honduras’ textile industry “leaves behind an army of people, the majority women, with severe damage to their bodies.” Given the low wages and dangerous working conditions in Honduras’ sweatshops, it is no surprise that Honduras’ sweatshop industry is located in a geographic area with a high rate of migration. If the White House actually wanted to address migration, it would advocate for living wages and labor rights instead of celebrating the creation of low-wage, dangerous jobs that simply serve to create huge profits for U.S. corporations.

All too often, the U.S. government promotes policies that benefit U.S. corporations in Central America as economic “development” without much push-back. SOA Watch and other solidarity organizations are working to change that. Last week, Lulu Matute of SOA Watch joined representatives of CISPES, Witness for Peace, and the Chicago Religious Leadership Network on Latin America (CRLN) at a Town Hall hosted by Rep. Jesus “Chuy” Garcia, Rep. Jan Schakowsky and Illinois State Rep. Delia Ramirez “to advocate for anti-imperialist foreign policy.”

The U.S. must acknowledge its role in the root causes of migration from Central America & be honest about the role our foreign policy has played in destabilizing the region. I joined Rep. @JanSchakowsky & @RepDeliaRamirez to advocate for anti-imperialist foreign policy. pic.twitter.com/H866K9gU41

This followed a Town Hall hosted by Rep. Ilhan Omar in Minneapolis with participation from Witness for Peace, SOA Watch, and NISGUA, which also challenged the dominant U.S. narrative about “development.” The Town Halls are a follow-up to our recent collaborative solidarity organization delegation to Central America during which Representatives Omar, Garcia, Bowman, and Bush were able to hear directly from human rights organizations and social movements about the impacts of U.S. policy in Honduras, Guatemala, and El Salvador. 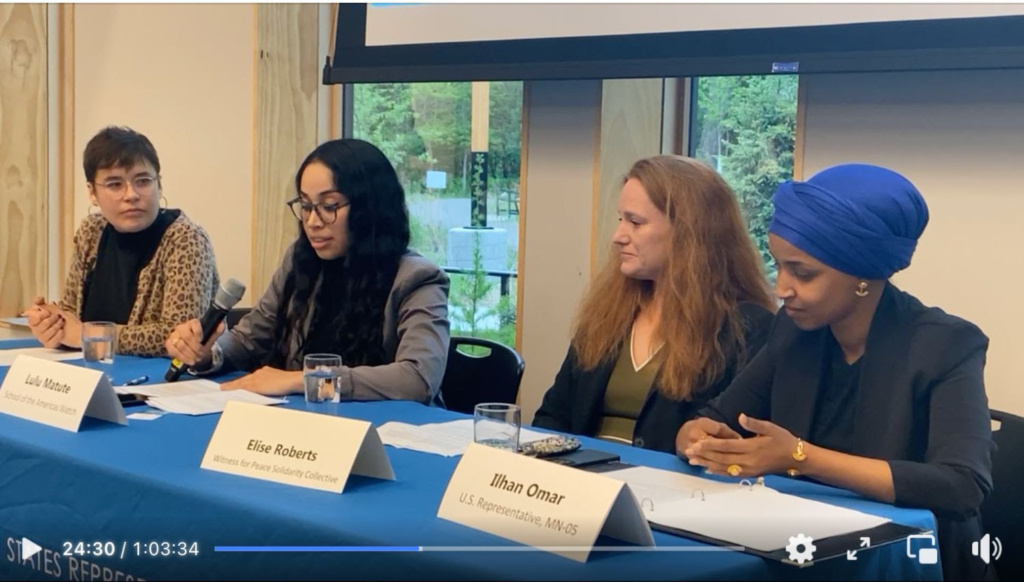