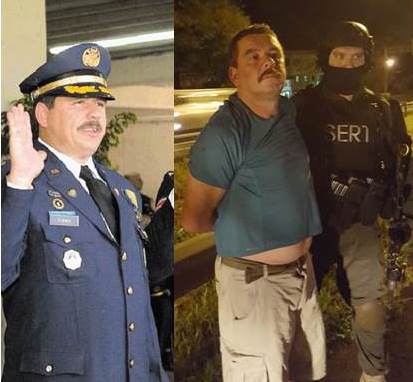 On June 21 of this year, José Pizarro Espinoza was arrested with 237 kilos of cocaine.  In 2007, however, Pizarro had been nothing less than the Director of the Public Security Forces of Costa Rica.

According to online newspaper El Comercio, Pizarro “achieved that role thanks to his extensive training and his police career trajectory, where he gained knowledge that years later would be put into the service of the narco-trafficking cartels of Colombia and Mexico, according to investigations by the authorities.”

Pizarro received military training at the School of the Americas in Panamá, and by the Drug Enforcement Agency (DEA).

For Marcela Zamora, of the Costa Rica Friends Peace Center, “the arrest of Captain Pizarro, an SOA graduate, is a cause for concern because in the first place it shows us — as we had been warned —  that the training has contributed to the creation of paramilitary groups like Patrol 1856 and the Patriotic Front for.National Defense. These groups were created with the excuse of defending our borders and thus justifying the establishment of a National Army —  something which had been abolished more than five decades ago.”

For Zamora, the ties to the world of drug trafficking and to paramilitary groups which came to light when Pizarro was detained “also show us that the pretext of a war on drugs, which has been the excuse for militarizing our police, now has reversed its course and we see that the militarized police are now in the service of illicit businesses and in the service of the violence of drug trafficking in our region.” It is presumed that José Fabio Pizarro came to be the chief of operations of a Mexican international drug trafficking cartel, and that he coordinated linkages in Colombia and Centroamérica.

On June 29th of this year, SOAW-Costa Rica together with the Costa Rica Friends Peace Center sent a joint letter to Costa Rican President Luis Solis Rivera.  In the letter they requested information about the training that Costa Rican police continue to receive at the School of the Americas (today known as WHINSEC — the Western Hemisphere Institute for Security Cooperation).

A total of 21 Costa Rican police were trained at WHINSEC in 2015. In 2016, 12 more uniformed police traveled to the United States to receive WHINSEC training, according to official WHINSEC statistics.

“We are requesting, again, details about the training and also the names of the police officers who have gone for this training, because as citizens we have a need to know what training our Police are receiving, and who these people are.  This is an essential element of responsible citizen budget oversight, given the gravity of consequences if later these police are found to be involved in criminal acts such as drug trafficking,” said Zamora, adding that “the military-style training that our police forces receive there is influencing both active and retired police to seriously propose that Costa Rica needs a military.   On some social networks, there have even been some police who, when discussing labor claims and claims regarding their right to strike, have brought up that “essentially, we are the army in Costa Rica.”

This is not the first time that graduates of the School of the Americas have been associated with drug trafficking.  In 2008, Col. Álvaro Quijano and Major Wilmer Mora, both of Colombia, were arrested and tried for collaboration in drug trafficking.  Both Quijano and Mora had been instructors at the SOA/WHINSEC during the years 2003 and 2004.  They taught courses in Peace Operations and in Democratic Sustainment.