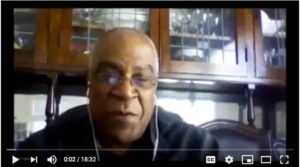 During SOAW’s Virtual Vigil in November, we heard from Pierre Labossiere, co-founder of the Haiti Action Committee and the Haiti Emergency Relief Fund, who gave a presentation on the bloody history of U.S. intervention in Haiti and the current situation, including ongoing U.S. backing of the Moïse regime’s repression in Haiti. Watch his presentation here.

Pierre denounced that paramilitary networks, which often operate in coordination with the government and police, control many areas. There have been alarming number of brutal massacres in neighborhoods where many oppose the regime as well as targeted killings of opposition leaders.

Human rights organizations have documented the coordination between the Moïse regime and massacres carried out by paramilitary networks. The report ‘The Lasalin Massacre and the Human Rights Crisis in Haiti,’ by the National Lawyers Guild and the Haiti Action Committee, documents how the U.S.-trained and financed Haitian National Police worked closely with paramilitary elements to carry out the November 2018 Lasalin masacre, in which people were burned alive, hacked to death, raped, and had their body parts fed to pigs and dogs.

The report further finds that: ”the US government has continued to diplomatically and economically support the Moïse government, despite clear evidence of its human rights violations. US support for the Moise government includes millions of US tax dollars to fund and train the [Haitian National Police], despite its well-documented participation in brutality, killings of unarmed protesters, arbitrary arrests, torture, extrajudicial killings, and massacres such as the Lasalin massacre.”

Indeed, despite facing massive protests, U.S. backing has ensured Moïse remains in power. With no parliament, Moïse has been taking steps to consolidate his power. In late November, he created a new National Intelligence Agency over which he has complete control, and which many fear will target the opposition. The Miami Herald describes this new force as ‘secret police officers [who] will have immense and unlimited powers.’

Join the Haiti Action Committee’s week of action to demand an end to U.S. backing of the Moïse regime and financing of the Haitian police.

1. Participate in the social media week of action by posting on twitter and other social media:

2. Send an e-mail to your Congresspeople asking them to stop U.S. support for the Moise regime and suspend U.S. financing of the Haitian police at the next possible opportunity.