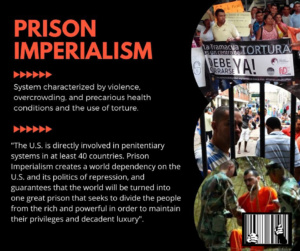 We, the undersigned, denounce the fact that in the emergency provoked by the COVID 19/Coronavirus, the overcrowding of large number of prisoners in different jails around the world constitutes a grave danger for the propagation of the virus that is threatening humanity: the walls of the prison serve for nothing in the containment of Coronavirus. In the current context, the prisons constitute a breeding ground for the coronavirus that affects the inmates, the workers, and their families and the communities where these institutions are located. As internationalists, we make three demands to the nations of the world, and one in particular to the United States:

Prison Imperialism refers to the efforts of the U.S. government to export its model of mass incarceration around the world, a process that began 20 years ago on March 31, 2000. Through this process, the U.S. government finances, manages, and designs prisons with the goal of restructuring the penal systems of different countries, especially in the global South. Today, the U.S. is directly involved in penitentiary systems in at least 40 countries. Prison Imperialism creates a world dependency on the U.S. and its politics of repression, and guarantees that the world will be turned into one great prison that seeks to divide the people from the rich and powerful in order to maintain their privileges and decadent luxury.

Today, the U.S. model of mass incarceration represents a threat for the life and liberty of every one of us. The U.S. has five percent of the world’s population, but 25% of the global prison population, with the highest rate of incarceration in the world. Presently, more than 2.3 million persons in the U.S. live locked down in a system characterized by violence, overcrowding, and precarious health conditions. Given the news that the U.S. heads the list of coronavirus cases globally, and given its principle responsibility for Prison Imperialism, the U.S. government has the obligation to fulfill our demands and stop the exportation of its penitentiary model.

With the 20th anniversary of Prison Imperialism, the crisis occasioned by the coronavirus and global capitalism tales on greater meaning. On March 31, 2000, the governments of the United States and Colombia signed the Program for the Improvement of the Colombian Penitentiary system. A short time later, La Tramacúa penitentiary became the first international prison to be built with US financing and designs. This accord with Colombia marked the path leading to the construction of the notorious prison in Guantanamo, Cuba, and the infamous prisons of Abu Ghraib and Bagram, in Iraq and Afghanistan, respectively. The influence of the U.S. penitentiary system on the Colombian system has resulted in the increase to more than 54% of the rate of overcrowding—the highest in its history, and an increase in reports of violations of human rights and the use of torture. The provision of food is insufficient, and many times contaminated. and the lack of access to water is widespread and even used as a form of punishment for inmates. Different Colombian courts, including the Constitutional Court, have ordered the closure of La Tramacúa because of its inhumane conditions, and have also declared that the overcrowding and the system of health care in Colombian prisons are in violation of the constitution. This is the power of the U.S. influence in the Colombian prison system.

Today, as an accomplice in Prison Imperialism, Colombia is charged with the training of penitentiary personnel principally in Mexico and Central America. Two decades after the beginning of Prison Imperialism and investments in the Colombian system, the U.S. has additionally spent at least $22 million on international prison management programs. Most of those funds have been destined for Central America and especially Honduras.

In Honduras, the change in the prison system is directly connected with the politics of security that have surged as a result of the coup financed and supported by the U.S. in 2009. After the coup, the maximum security prisons of El Pozo, La Tamara, and La Tolva were constructed without this diminishing the violence and corruption of the country. Instead, since the coup, the country finds itself in a humanitarian crisis in which the new penitentiaries are used to lock up the opposition to the regime of Juan Orlando Hernández. Just at the end of 2019, two massacres in two Honduran maximum-security prisons left 37 persons dead in two days.

In Mexico, an accord signed by the U.S. in 2018 called the Correctional Reform will seek to supervise, revise, and administer the penal system. The American Correctional Association has suggested recommendations approved for the same guidelines for Mexico, Afghanistan, and some countries in Africa. The result of this accord has been an increase in the number of cases of human rights violations, torture, and murders in the Mexican penal system, emulating the experiences observed in Colombia and Honduras.

In the detention center for migrants and refugees in the U.S., the denunciations of constant violations of human rights are nothing new. The overcrowding, the lack of hygiene, and the poor food provisions put the most vulnerable at risk. In only one week in March, three children locked in a detention center were diagnosed with coronavirus. Despite that the children were freed, many more that were exposed to the virus risk falling sick without the conditions for adequate treatment. Before this situation, the response of the U.S. government has been the deportation of these person to the countries of their origin, exposing new communities to the pandemic and violating the right of these persons to seek asylum to in order to save their lives. From Colombia to Iraq, from Saudi Arabia to Haiti, the U.S. is responsible for the construction of a prison model that augments the lethality of the coronavirus and puts the health of the world at risk.

The massacre at La Modelo prison on March 21, 2020 was a brutal lesson in the consequences of Prison Imperialism: 23 inmates were killed and 83 more were wounded by agents of the Colombian Armed Forces seeking to repress inmates that were demanding the release of elderly and nonviolent prisoners in order to protect them from the pandemic. The La Modelo protest was not unique. Around the world, from France to the U.S., Palestine to Peru, prisoners are rebelling against all the conditions that are exposing them to the coronavirus: every protest is motivated by the fear of inmates who want to protect their lives. The inmates do not protest for themselves alone, but also for the protection of prison personnel with whom they interact daily. The jails are a time bomb of infection constituting a threat to world health.

For the above reasons, we raise this humanitarian petition with the final goal of saving the lives of those who find themselves most vulnerable before the world pandemic. 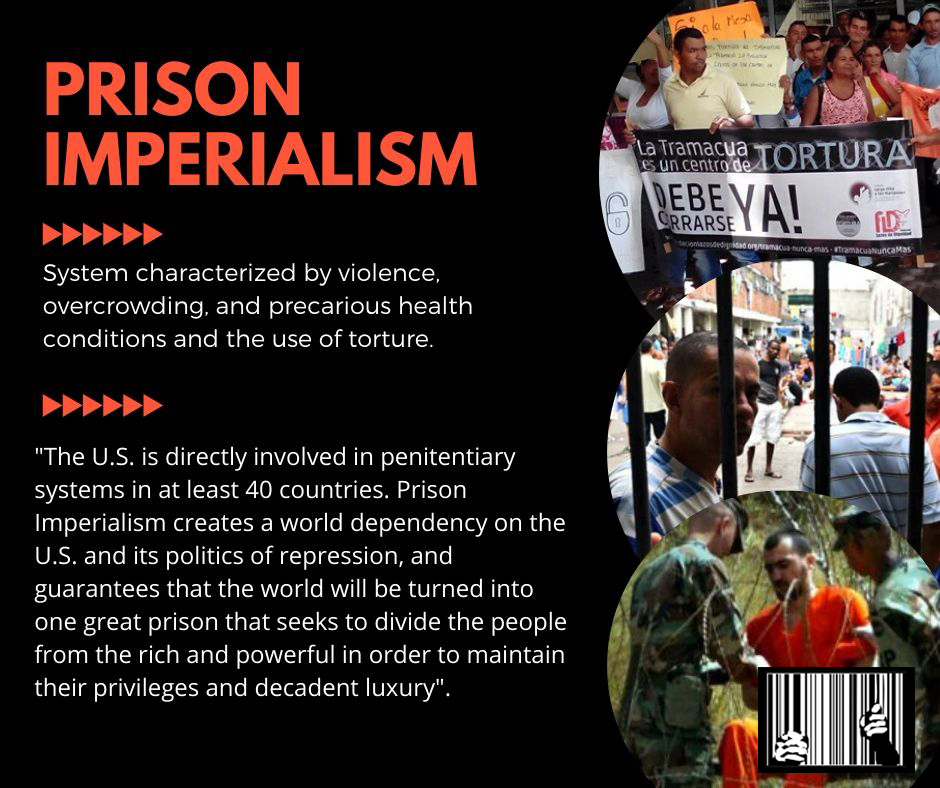