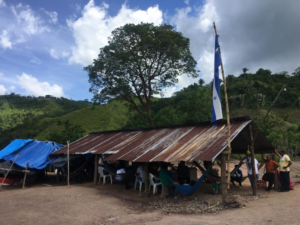 On Saturday, February 23rd, 12 Honduran activists who have been defending the drinking water of numerous communities from a mine owned by members of Honduras’ powerful oligarchy were jailed in an extreme misuse of the justice system. This Thursday, February 28th, a hearing will be held that will determine if the 12 defenders of the Guapinol River will spend up to several years in jail while awaiting trial or not. The US-backed Honduran Public Prosecutor’s Office is pursuing charges against at least 32 defenders of the Guapinol River; many are facing serious charges that could result in decades in prison.

Take action: The US supports the Honduran Public Prosecutor’s Office, which is prosecuting the Guapinol activists.  E-mail your Representative and the office of Senate Foreign Relations Committee Ranking Member Robert Menendez here.

For months, communities in the Bajo Aguan region maintained a camp defending the Guapinol River and their drinking water from a mine owned by Lenir Perez and Ana Facusse, who belong to one of Honduras’ most powerful families. It is notable that this mine is in the Carlos Escaleras National Park — named after Carlos Escaleras, who was assassinated in 1997 defending the very same Guapinol River and who served as the coordinator of one of the organizations that is now being criminalized. Human rights defenders have presented a Constitutional Challenge to the Legislative Decree that reduced the nucleus of the national park, thus facilitating the mining concession. The Guapinol Dignity Camp has been violently evicted by US-backed Honduran security forces and leaders have faced defamation and threats.

Military and police repression, as well as military intelligence and provocateur tactics, often go hand in hand with judicial persecution. There is a clear pattern of abuse of the justice system in Honduras to silence human rights and environmental defenders and activists. In the case of the Guapinol defenders, the US-backed and trained Honduran Public Prosecutor’s Office has presented charges that include illicit association, arson, illegal detention, and usurpation. The inclusion of the illicit association charge enables the case to be heard in Honduras’ National Jurisdiction Court, which is a special court created to hear cases against organized criminal networks. This National Jurisdiction Court frequently hears high profile cases, instead of the normal regional courts, and is thought by many to be controlled by political interests.

Political prisoners Edwin Espinal and Raul Alvarez, who were arrested during the pro-democracy demonstrations over a year ago, have been jailed for over a year on orders of the National Jurisdiction Court despite the fact that the charges they are facing are not within the competency of that court. Last week, the National Jurisdiction Sentencing Tribunal admitted that it does not have competency to rule on their case and that the case should be sent to a local court. This means that Edwin and Raul have been imprisoned in inhumane conditions for over a year despite the order coming from a court that did not have the authority to rule on their case.

In both cases, the US-backed and trained Honduran Public Prosecutor’s Office has zealously pursued serious criminal charges against human rights activists. It is conspicuous that the Public Prosecutor’s Office has filed illicit association charges against Guapinol human rights defenders but the same institution has repeatedly declined to file illicit association charges against the criminal structure that murdered Berta Cáceres and executed other crimes against the Lenca people despite multiple requests from the victims. The institution has persecuted Edwin and Raul and others who demonstrated against election fraud, but the state actors responsible for the murder of dozens of those demonstrators have not been held to account.

Take action today: Call the Congressional Switchboard – 202-224-3121- and ask for your Representative and/or Senators. When you reach the office, ask for the foreign policy staffer and explain that you are extremely concerned that the US-backed Public Prosecutor’s Office in Honduras has requested jail for 12 human rights defenders. Ask that they contact the US Embassy to express concern about the wrongful use of the justice system to jail the Guapinol environmental defenders and other human rights defenders. You can also e-mail your Representative here.