The search for truth with justice is under attack again in Guatemala. Currently, a proposal in congress seeks to reform the 1996 National Reconciliation Law and seeks to grant immediate amnesty to perpetrators of human rights violations during the 36-year armed conflict. The National Reconiliation Law that came about after the Peace Accords were signed and excludes amnesty for crimes against humanity – disappearance, genocide and torture – has been instrumental in paving the way for key trials that have taken place over the past several years. Between 2008 and 2018, over 30 military officials and civil defense patrols have been convicted of human rights violations, over a dozen more cases are pending, and an overwhelming number of those convicted or pending trial are School of the Americas graduates.

At SOA Watch, we know that without truth, there cannot be justice, and the proposed amnesty law is a direct attack on survivors and victims of the armed conflict and genocide that left over 200,000 dead and over 45,000 disappeared. We stand in solidarity with the survivors and victims of the armed conflict and genocide in rejecting the proposed amnesty law. Any modification would be a direct violation of the Guatemalan Constitution and the 1996 Peace Accords, and would represent a crippling setback for families who have, for over 30 years, demanded justice for human rights violations, thus guaranteeing impunity. A few of the cases that would be immediately impacted by amnesty law, should it pass include the burning of the Spanish Embassy, CREOMPAZ, the Dos Erres Massacre, the Genocide Trial, Marco Antonio Molina Theissen, the Rio Negro massacre, and Sepur Zarco. Just yesterday, Maya Achi women, surivors of the armed conflict, filed an injunction to challenge the proposed amnesty law head-on.

The proposed reform to the National Reconciliation Law comes amidst an ongoing crisis in the fight against corruption. Guatemalan President Jimmy Morales has taken alarming and unconstitutional measures to consolidate the power of criminal networks in Guatemala over the past several weeks. On January 7th, Morales unilaterally and illegally declared the closure of the United Nations’ International Commission Against Impunity in Guatemala (CICIG), which has made remarkable strides over the past decade in investigating and prosecuting criminal networks and corruption in Guatemala. The CICIG played a key role in prosecuting the 2015 massive corruption case that resulted in SOA-graduate and then-President Otto Perez Molina finally being indicted on corruption charges and jailed, as well as numerous other cases.

More recently, in an independent action to uphold the rule of law, Guatemala’s Constitutional Court suspended President Morales’ action, finding it to be unconstitutional.  The treaty that establishes the CICIG does not give the president the power to suddenly close it down. However, in what clearly seems to be an act of retribution, the Supreme Court of Justice ruled on January 9 to initiate the impeachment of several Constitutional Court judges. The Morales administration has also defied orders of the nation’s Constitutional Court by ordering migration officers to block the entry of CICIG staff, leading to a CICIG investigator being illegally held 24 hours at the airport and pitting state institutions against each other.

In response, on January 9, SOA Watch joined 15 other leading organizations, including our sister organizations theChicago Religious Leadership Network on Latin America, the Guatemala Human Rights Commission and the Network in Solidarity with the People of Guatemala, in writing a letter of concern regarding the recent actions taken by the Morales administration, in what amounts to a “technical” coup, as well as to reiterate public support for the CICIG.
The attack on the independence of Guatemala’s Constitutional Court threatens to further increase the rampant impunity and corruption with which criminal networks can operate in Guatemala.  It puts Indigenous, campesino, social movements and survivors of the 36-year US-backed armed conflict even further at risk, as they already face an outrageous level of criminalization by courts for defending their land from corporate plundering and demanding justice.  Numerous community leaders are already jailed as political prisoners, and in 2018 alone over two dozen land and human rights defenders were assassinated.
To learn more, join our partners at GHRC for a virtual lunch this Friday, February 15. More information below: 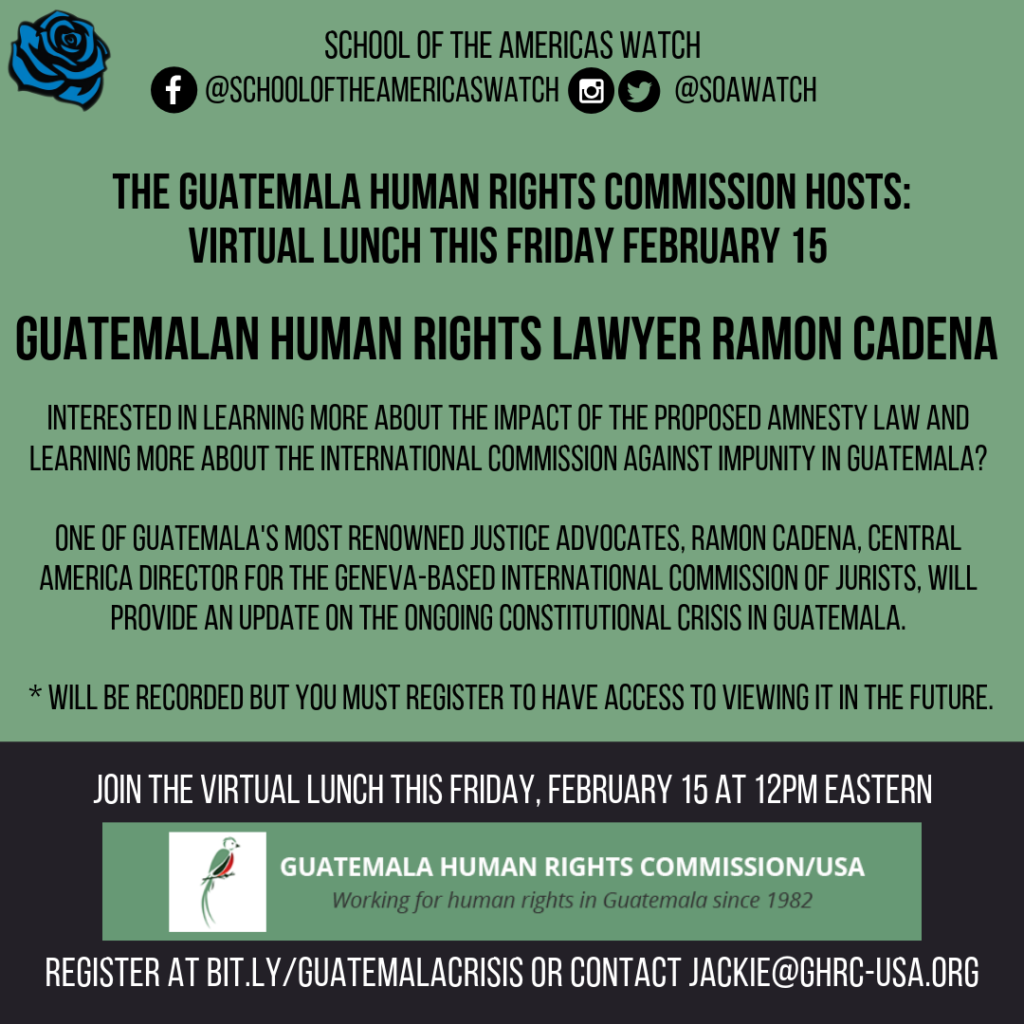