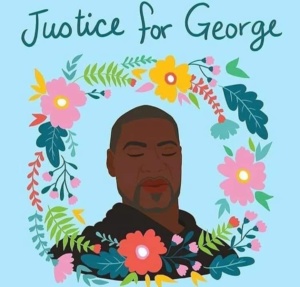 SOA Watch stands in solidarity with the protests taking place across the country to demand justice for the state-sanctioned murders of George Floyd and Breonna Taylor and overturn a racist system that murders and criminalizes Black people.

This system is built on white supremacy that values property and white comfort over, and at the cost of, Black lives. We condemn the violent crackdown on demonstrators by militarized police and other state forces which use tear gas, rubber bullets, live bullets, arrests and mass incarceration, threats of deportation, and dangerously violent tactics against the legitimate uprising of oppressed Black folx and allies utterly exhausted from having the oppressive knee of the state figuratively and literally on their necks.

We remember and say the names of George Floyd, Breonna Taylor, Tony McDade, Ahmaud Arbery, Michael Lorenzo Dean, Atatiana Jefferson and so many others who should still be alive today.

The SOA Watch movement stands with our Black brothers and sisters demanding accountability and the defunding of the police, which originated as slave patrols to protect white property. We echo the calls for these funds to be redirected to support transformative justice initiatives addressing the root causes of harm, health care, schools, and other community-led initiatives that actually uphold the well-being of our communities. Firing the officers is not enough, police ‘reform’ programs are not enough — we must work to dismantle the systemic racism on which the United States is built and the culture of white supremacy and anti-Blackness on which state violence relies transnationally.

SOA Watch denounces Trump’s dangerous threats to enact the Insurrection Act from 1807 to deploy active-duty US troops against protesters engaged in the critical resistance to defend Black lives throughout the US. We condemn the collaboration between police, National Guard, ICE, Border Patrol, and any other state “security” forces facilitating the repression, surveillance, and policing of the Black community and protestors.

As a movement that understands and strategically utilizes the power of direct action and civil disobedience, we invite you to support the protests by taking action and donating, if you have the means, to one or more of the bail funds that are supporting the protests. If you are looking for more information, you can start at this page shared by Black Lives Matter, this page shared by Black Visions and Reclaim the Block, and The Movement for Black Lives‘ page.

For white people, it is essential to educate yourselves and to take action that centers the grief, righteous rage, and leadership of our Black brothers and sisters – being silent is being complicit. If you are looking for additional information, please check out this online tool kit filled with anti-racism resources for white people.

We send love and solidarity to our Black brothers and sisters who are grieving and who are organizing for liberation. From the US, to Colombia, Honduras, Chile, Palestine and all over the world, Black liberation is our collective liberation – when we fight together, we win.