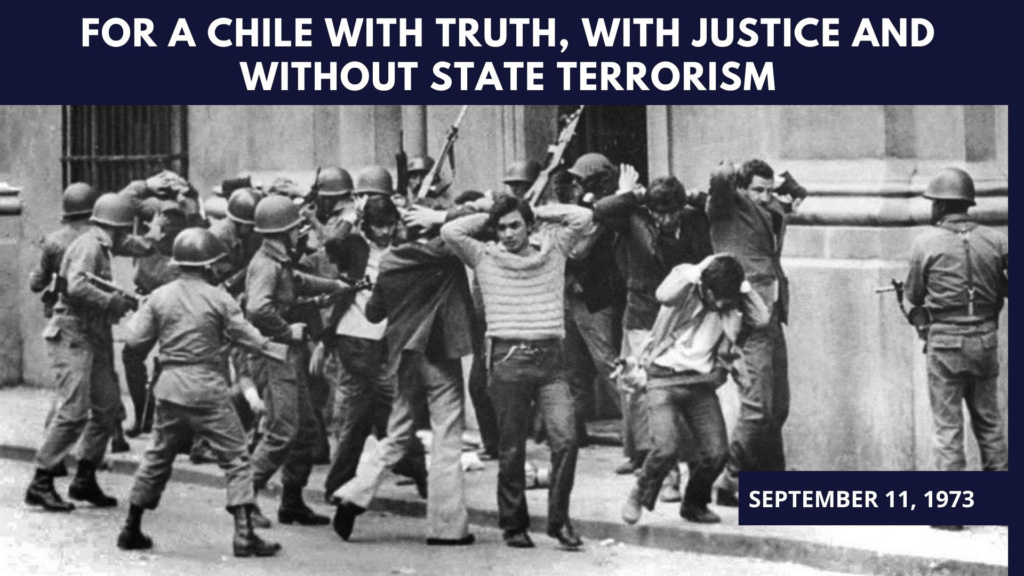 In Chile, this September 11 marks 47 years since the military coup in 1973 against President Salvador Allende. Said military coup had the complicity of the United States government, which provided financing, training at the School of the Americas, and where the CIA handed over weapons to civilians and military coup leaders, as revealed in the Report “Covert Action in Chile 1963-1973 ”, also known as the Church Report, delivered to the United States Senate in 1975 and other reports subsequently declassified.

47 years after the coup, demands for justice continue to be made by: organizations of relatives of the disappeared and politically executed detainees, as well as the survivors of torture. These groups demand, Truth, Justice, adequate reparation measures, as well as guarantees that these crimes against humanity will never be repeated.

The Stae of Chile remains indebted to thousands of people who experienced State Terrorism firsthand.

Without a doubt, the impunity enjoyed by the criminals of yesterday and today does nothing to help build a Chile which respects the human rights of the Chilean and Mapuche people.

Unfortunately, SOAWatch has witnessed, with deep concern, the systematic violation of human rights that have occurred after the protests which began on October 18, 2019, when the National Institute of Human Rights (INDH), issued its report detailing 6 complaints for homicide, 23 for attempted murder by State agents; 206 complaints for sexual violence, including rape; and 1,083 complaints oftorture and other cruel, inhuman and degrading treatment such as beatings, touching, stripping, injuries caused by firearms and more. The INDH also indicated that 460 people were injured during the protests that began in October of 2019.

The violence against the civilian population was of such a degree that a police report revealed that 104 thousand shots were fired in the first two weeks of the protests and thousands of tear gas bombs, made in the United States, have been used against the population to date.

Many have been injured by the criminal action of state agents. The State of Chile has not provided adequate and timely medical attention to many of them. Also, thousands of people were arrested and a significant number are still in prison for participating in social protests.

It should be noted that the INDH also filed 71 complaints, from October 18, 2019 onwards, for human rights violations against the Armed Forces.

Among them, there are 84 victims at the hands of the Chilean army, which is led by Ricardo Martínez Menanteau, current Commander-in-Chief of the Army, who took a course in “Joint Operations” at the School of the Americas (SOA) now known as WHINSEC. Martínez and other high-ranking officials, graduatesfrom the SOA, are also being investigated for corruption by the Chilean justice system for fraud against the treasury amounting to millions of dollars.

Prior to the social protests of 2019, the treatment of the Mapuche People was already a clear example of how a socio- political conflict is being “militarized” by the Chilean State.

The response by the Chilean State to the Mapuche People, who are claiming their ancestral rights, has been repression; the creation of controlled zones; and the constant harassment against their communities, including assassinations, arbitrary detentions, political prisoners, and even rape.

The Mapuche children have also had their rights trampled as they are often exposed to violence and police repression.

It is also known that the Chilean police have received military training in Colombia and the United States.

Unfortunately, Chile continues to be one of the countries where more ztate agents, especially the military, are sent to receive training at the School of the Americas, now known as WHINSEC, where training continues under the logic of war, violence, and US military doctrine guided by the National Security Doctrine.

In the 10 year period between 2009 to 2019, the School of the Americas has trained 2,147* agents of the Chilean State; a majority of the students are from the Military School of the Army of Chile. Members of the Navy and Air Force and also police officers have received training in the United States.

Since the founding of the US Army School of the Americas, more than 5,500 Chilean military or security forces have received training there.

In past decades, SOAWatch has met with former Defense Minister Vivianne Blanlot; former ministers Andres Allamand, José Goñi, and José Antonio Gómez and has repeatedly requested that Chile cease its training at the School of the Americas where many agents of the DINA and CNI, Pinochet’s secret police, were trained in torture techniques and murder.

Unfortunately, The United States continues to set a bad example, from which Latin American countries can learn nothing good.

Crimes continues being committed against Afro-descendants, Latinos and immigrant populations.

War crimes are being committed by the United States beyond of its borders; intervening in foreign countries, using torture, maintaining an illegal jail at Guantanamo, among other practices contrary to human rights.

47 years after the Military Coup against Salvador Allende, we reiterate our full support and solidarity with organizations of Chilean relatives and groups that honor the memory of those who’s rights were violated and with the Mapuche people and join them as they continue to demand a Chile with Truth, with Justice, and without State Terrorism.