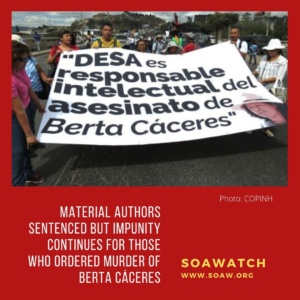 On December 2, 2019, a Honduran court sentenced seven men for the murder of visionary Honduran social movement leader Berta Cáceres — over a full year after finding them guilty.  This includes Douglas Bustillo, an SOA graduate and former head of security for the hydroelectric dam company DESA, and fellow SOA graduate Army Major Mariano Díaz. Díaz was trained by the United States not only at Ft. Benning, but also in counter-terrorism at the Inter American Air Force Academy in Texas, and was part of the the US-led war in Iraq. He was as an Army Major, instructor for Honduras’ Military Police, and head of military intelligence for Honduras’ First Battalion.

However, neither Bustillo nor Díaz nor any of the five sentenced were the ones who ordered and paid for Cáceres’ murder. Those sentenced primarily had roles related to the preparation or execution of the murder, but the money and order to carry out the murder came from above. Over three and a half years after Cáceres’ murder, none of the intellectual authors have faced trial.

Bustillo and Díaz were sentenced to 30 years and six months and 30 years respectively.  Bustillo and Díaz communicated with Henrry Hernandez, a former soldier who had served under Díaz in the military. Hernandez led a group of hitmen to Cáceres’ home on March 2, 2016 to execute the murder. Hernandez and three other hitmen were sentenced to 50 years for both the murder of Cáceres and the attempted murder of Mexican environmentalist Gustavo Castro, who was at Cáceres’ home at the time of the murder.   Additionally, Sergio Rodríguez, DESA’s Environmental and Social Manager, who coordinated informants who monitored Berta Cáceres and COPINH, was also sentenced to 30 years and six months. The verdict and sentences are subject to an appeal process and several defense lawyers have indicated they will file appeals.

The court’s sentence affirmed that Cáceres was murdered for her leadership in COPINH’s opposition to DESA’s internationally-financed hydroelectric project on the Gualcarque River. Moreover, according to Cáceres’ organization COPINH, the court ruled in its sentence that Berta’s murder was planned ‘with the knowledge and consent of the executives of the DESA company, including Mr. Sergio Rodríguez and others who are not part of this process.’Only one other person has been arrested for Cáceres’ murder, former Honduran military intelligence officer and President of DESA, Roberto David Castillo. The evidence admitted during the trial of the seven suggests that Bustillo was the intermediary in planning the murder who coordinated with his former boss, Roberto David Castillo. However, beyond Castillo nobody else has been arrested and Castillo’s case has moved extremely slowly.

As long as all of the intellectual authors who made the decision to murder Berta Cáceres and who paid for the murder to be executed are not brought to justice, impunity will persist. Furthermore, the entire criminal structure that persecuted Cáceres and COPINH must be dismantled. Cáceres murder was the culmination of years of persecution and violence against COPINH members who opposed the Agua Zarca Hydroelectric Project on the Gualcarque River. Additionally, it is extremely concerning that the concession of the Gualcarque River that Berta was killed while opposing has not been cancelled.

SOAW joins COPINH and Berta’s children in calling for all of the intellectual authors, however powerful they may be, to be brought to justice and for the concession of the Gualcarque River to be cancelled.

PS: Please sign COPINH’s petition demanding JUSTICE for BERTA – that progress be made in the investigation, prosecution and punishment of intellectual authors. 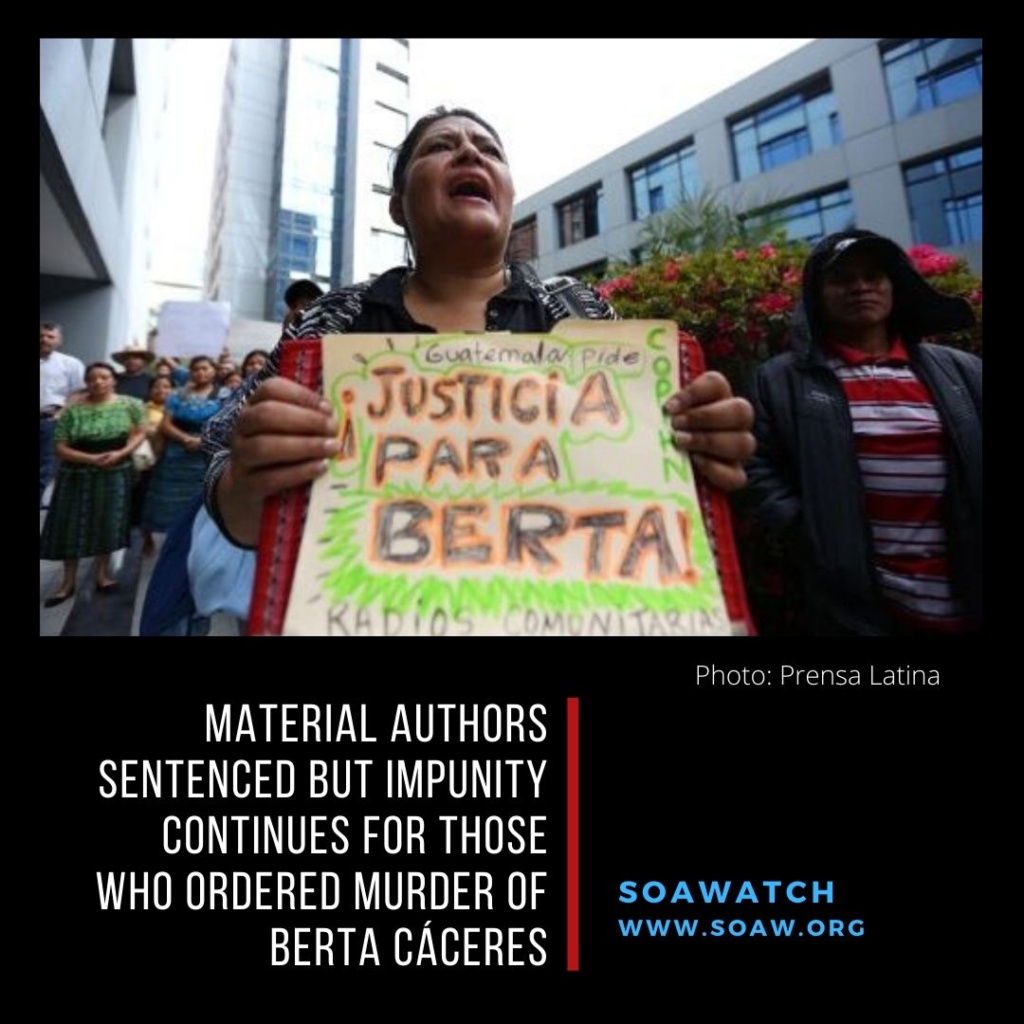