SOA graduate and former Vice Minister of Public Security Colonel Inocente Montano is the defendant currently facing trial. During the first day of the trial, charges were extinguished against former Lieutenant Yusshy Mendoza, who was part of the group that went to the University of the Central America to carry out the massacre. Former Lt. Mendoza has previously confessed and will be a witness in the trial; he is expected to testify in July.

Former Vice Minister Col. Montano is accused of being part of the group of high ranking military officials that ordered the murders. The United Nations’ Truth Commission on El Salvador’s civil war found:

‘There is substantial evidence that on the night of 15 November 1989, then (head of the Armed Forces) Colonel René Emilio Ponce, in the presence of and in collusion with General Juan Rafael Bustillo, then Colonel Juan Orlando Zepeda, Colonel Inocente Orlando Montano and Colonel Francisco Elena Fuentes, gave Colonel Guillermo Alfredo Benavides the order to kill Father Ignacio Ellacuría and to leave no witnesses. For that purpose, Colonel Benavides was given the use of a unit from the Atlacatl Battalion, which two days previously had been sent to search the priests residence.’

Fr. Ignacio Ellacuría, rector of the University of Central America (UCA) was an important proponent of peace negotiations to end El Salvador’s civil war. When the massacre was committed, the military attempted to blame it on the FMLN guerrillas in an attempt to further derail peace talks.

Col. Montano was just one of several high ranking military officers indicted by the Spanish court, however, El Salvador has refused to extradite the others to Spain to face trial. Montano was only extradited because he was found living in the United States. He was extradited to Spain after serving time for immigration fraud, a result of extensive work by the Center for Justice and Accountability. Thus, he is currently the only high ranking officer facing trial. For a detailed analysis of Col. Montano’s role in the massacre at the UCA, read the expert witness report submitted by Stanford Professor Terry Lynn Karl to a U.S. court in the immigration fraud case against Montano.

SOA Watch stands with the Salvadoran people in their struggle for justice and against impunity after so many years. The trial in Spain is also a result of years and years of work by organizations that have sought justice in the courts, including the Center of Justice and Accountability, the Spanish Association for Human Rights, and Guernica Group. After beginning this week, it is scheduled to continue from July 8-16, 2020.

We know that the United States must also be held accountable for financing the military in El Salvador and training many of those involved in the planning and execution of the UCA massacre at the School of the Americas. And we recommit ourselves to honoring the memory of those killed by U.S.-backed state violence, both in the past and today, both at home and around the globe. 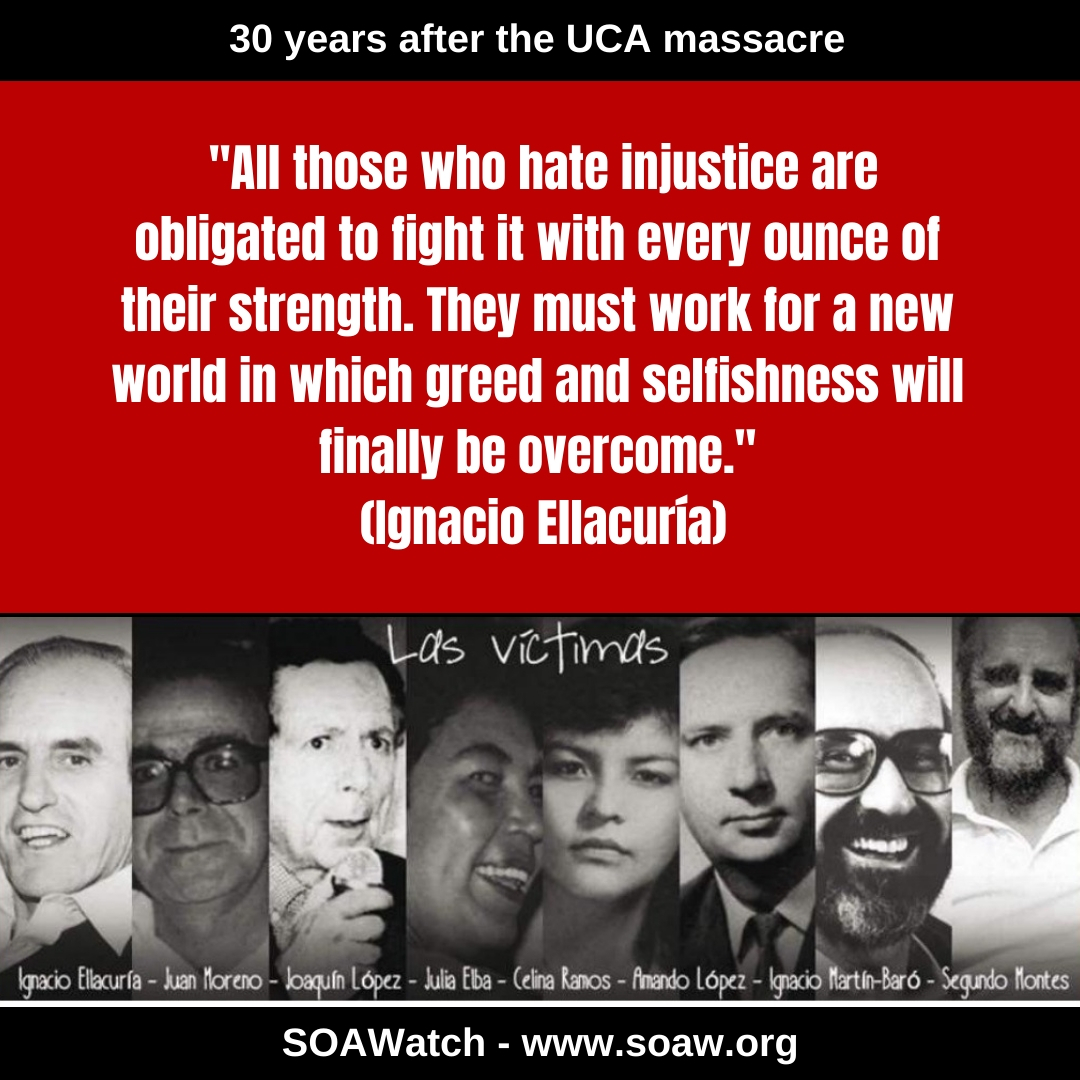