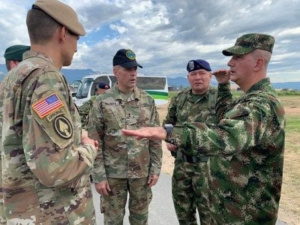 SOA Watch condemns the recent increase of U.S. militarization in Colombia and nearby bodies of water, including the June 1, 2020 deployment of the U.S. Army 1st Security Force Assistance Brigade (SFAB) from Ft. Benning, GA to Colombia. SFABs are specialized units that ‘advise and assist operations in foreign nations.’ The 1st SFAB was established at Ft. Benning, GA in October 2017, and deployed to Afghanistan in 2018. Now it has been deployed to Colombia as part of the ‘Enhanced Counternarcotics Operations’ announced by Trump on April 1, 2020.

In addition to deployment of the 1st SFAB, Trump’s ‘Enhanced Counternarcotics Operations’ also includes militarization of the Caribbean Sea and eastern Pacific Ocean, including the deployment of Navy destroyers, combat ships, aircraft, and helicopters. This significant increase in militarization in the name of stopping drugs also seems to be part of the latest incarnation of U.S. imperialist efforts to topple Venezuela’s government.

On March 26th, the Trump Administration accused Venezuelan President Nicolas Maduro and other Venezuelan officials, including the Defense Minister and Chief Supreme Court Justice, of running a ‘narcoterrorism partnership with the FARC’ (of Colombia). Attorney General William Barr announced the drug trafficking related charges and just days later, Trump announced the ‘enhanced’ drug war to be staged from neighboring Colombia with combat ships in the waters near Venezuela.

The hypocrisy and political nature of the U.S. drug war is clear when one compares U.S. treatment of Venezuela and Honduras. U.S. Department of Justice prosecutors identified the Honduran President as a co-conspirator in the trial of his brother for ‘state-sponsored drug trafficking.’ Essentially, the Department of Justice considers both the governments of Honduras and Venezuela to be involved in drug trafficking. Yet while the U.S. is heavily militarizing the area around Venezuela and has imposed deadly sanctions for years, it continues to support the Honduran government, sending millions of dollars and calling it a partner in fighting drug trafficking! Why such polar opposite treatment? The answer is simple – the right-wing Honduran government is beholden to US interests while the left-wing Venezuelan government is not.

The hypocrisy is even more flagrant when one considers that in late April, U.S. prosecutors accused Honduras’ former national police chief, SOA graduate Juan Carlos Bonilla (aka ‘El Tigre’), of drug trafficking on behalf of Honduras’ President Hernandez and his convicted brother. Yet, the United States continues to collaborate with the Honduran government to supposedly combat drug trafficking. When Bonilla, who has long been accused of having led death squads, was head of Honduras’ national police, the U.S. State Department spent millions on those same police, including to fight drug trafficking. Millions upon millions to fight drug trafficking will never work when the country’s officials are involved in drug trafficking and the U.S. must know this. Instead, stopping drugs is a convenient justification for spending money to support governments that do U.S. bidding, such as Honduras and Colombia, while simultaneously going after governments the U.S. wants to remove from power, such as Venezuela.

Trump’s ‘Enhanced Counternarcotics Operations’ is a dangerous escalation of U.S. militarization in the region. It is social movements, communities, and the poor who suffer the deadly consequences of the militarized drug war, as has been the case again and again in Colombia. Human rights organizations in Colombia have condemned the arrival of U.S. troops, denouncing that it threatens Colombia’s sovereignty and puts the communities where the troops will be stationed at risk as ‘actions supposedly to fight drug trafficking frequently bring with them increases in human rights violations.’ Indeed, after years of militarization and U.S. training of the Colombian military in the name of stopping drug trafficking, Colombia is the Latin American country with the highest number of human rights defenders murdered.

SOA Watch emphatically condemns this latest escalation of the drug war and U.S. imperialism. We stand in solidarity with the peoples of Colombia, Venezuela, and the entire hemisphere in their struggles for self-determination in the face of U.S. intervention.
SOA Watch