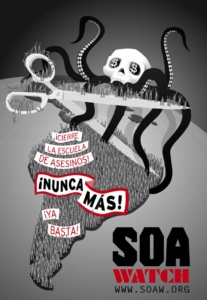 Guillermo Botero, the Colombian Minister of Defense, had to resign due to his responsibility in the bombing of the Army, on August 31, 2019, in San Vicente del Caguán, Caquetá, where seven children died.

Human Rights organizations also request the resignation of the Commander in Chief of the Colombian Army, Nicacio Martínez, a SOA graduate, for his responsibility in these events.

An investigation into “False Positives” by Fellowship of Reconciliation (FOR) in Colombia (2000-2010) concluded that a good percentage of the officers who participated in these crimes (around 5000 extrajudicial killings) were trained at the School of the Americas / WHINSEC .

According to the study: “12 of the 25 WHINSEC Colombian instructors and graduates between 2001 and 2003, of whom we have information available, had been charged with a serious crime or commanded units whose members reportedly committed multiple extrajudicial killings.”

On June 21, 2017, José Pizarro Espinoza was arrested, with 237 kilos of  Cocaine.  In 2007, Pizarro was the director of the Costa Rican Public Forces. Pizarro received military training at the School of the Americas and from the US anti-drug agency (DEA).

After 37 years, justice arrived for the Molina Theissen family.  On May 23, 2018, a Guatemalan Court sentenced 4 former Guatemalan officers, three of them graduates of the School of the Americas (SOA / WHINSEC), for the kidnapping and rape of Emma Guadalupe Molina Theissen, and for the forced disappearance of Marco Antonio Molina Theissen in 1981.

Among those responsible was Benedicto Lucas García, Manuel Callejas y Callejas, and Francisco Gordillo: Graduates of the School of the Americas

Among those found responsible Raúl Jofré and Edwin Dimter, Graduates of the School of the Americas.  Pedro Barrientos, a SOA graduate, is awaiting extraditions from the US where he is living

2019: In July, an Italian Court of Justice sentenced 24 former officials from Bolivia, Chile, Peru and Uruguay to life imprisonment for their role in Operation Condor, which was responsible for the forced disappearance of about twenty citizens of Italian origin in the decades of 1970 and 1980. Among those convicted are five graduates of the School of the Americas.

Among those responsible Luis Arce Gómez from Bolivia, he is already serving a 30-year sentence for genocide, Hernán Ramírez Ramírez from Chile; Luis Alfredo Maurente, Ernesto Avelino Ramas Pereira and Pedro Antonio Mato Narbondo of Uruguay, all Graduates of the School of the Americas