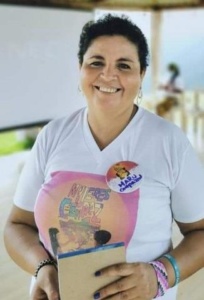 The undersigned organizations sign on to this public statement to express our deep concern for the life and wellbeing of human rights defender María Eugenia Mosquera, after a series threats made against her person.

María Eugenia Mosquera has been accompanying community processes for more than 10 years in the Pacific region of Colombia. Recently, between November 23, 2020 and January 2, 2021, she accompanied community activities in Buenaventura within the framework of the restitution process for the collective territory of the La Esperanza Community Council.

She also worked to take testimonies about the impact of the armed conflict in ethnic communities, which will be included in a report for the Truth Commission with leaders of the Community Council for the Afro-Colombian communities on the Naya Riva. Additionally, she worked on the characterization and initiation of the search plans with the Search Unit for Missing Persons (UBPDP), as well as documenting and monitoring cases of forced recruitment by armed structures in the urban area of Buenaventura.

María Eugenia Mosquera is part of the FOR Peace Presence accompaniment team, the National Ethnic Coordination for Peace (CENPAZ), the Peacebuilding and Nonviolence Committee of the CONVIDA20 Global Alliance and she is the legal representative for Communities Building Peace in Colombia (CONPAZ-COL).

This incident is part of a larger context of threats against members of the Buenaventura Civic Strike and particularly against the Committee for Access to Justice, Victims, Protection and Memory, of which María Eugenia Mosquera is a member, and the intimidation of members of the La Esperanza Community Council. This has also occurred amid a new surge in violence in Buenaventura, with 6 people killed by illegal armed structures in a single day, December 30, 2020. These groups are responsible for forced recruitment of youth and are trying to impose their control in the city through fear. Added to this are various extortionist actions, advertising what they call a social “cleansing” in the city.

WE CALL ON THE COLOMBIAN GOVERNMENT TO TAKE THE FOLLOWING ACTIONS:

1. The Ministry of the Interior and Justice, the National Protection Unit and the entire Committee for Risk Assessment and Recommendation of Measures (CERREM) should review the measures currently available to the human rights defender (vest and cell phone), to strengthen and reinforce these measures so that irreparable damage to her life and person is avoided.

2. The Attorney General’s Office must urgently establish the origin of the call from the number +57 3042014754 and carry out investigations to establish the material and intellectual authors of the threats against the human rights defender.

3. The Office of the Ombudsman must activate its institutional strategy of comprehensive action to guarantee the rights of human rights defenders, leaders and social leaders, their organizations and collectives in Colombia, the “WE ARE WITH YOU” plan, with the issuance of an Early Warning on the situation in the Colombian Pacific, including the case of this threat, to prevent it from materializing. It should also perform its duties in the search for justice in this case, following up on the investigations opened by the Prosecutor’s Office and its coordination role with the CERREM institutions to reinforce the protection measures for María Eugenia.