Since late April, teachers and medical workers have been demonstrating across Honduras against the privatization of education and medical services. The demonstrations in defense of public education and health services grew into massive and ongoing national mobilizations demanding the resignation of Honduran President Juan Orlando Hernandez. Hernandez is considered a US-backed dictator by many Hondurans, who are sick and tired of widespread corruption, violent repression, and neoliberal looting of the country that hands more and more to the economic elite and further sinks the majority of the population. 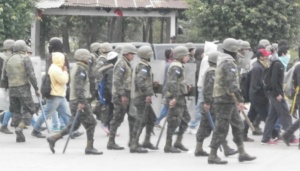 This is very much a US created problem, as it was US support for fraudulent election results that enabled Hernandez to assume a second term as President.  Furthermore, US dominated institutions like the IMF promote the privatization policies demonstrators oppose.  The US continues to back Hernandez’s grip on power, most likely because he reliably imposes US-backed neoliberal economic policies that favor business and privatization – the very type of policies that led to the recent protests in the first place.

The US Embassy in Tegucigalpa, Honduras recently announced that almost 300 U.S. Marines and sailors with the U.S. Southern Command’s rapid response force arrived on June 1st in Central America and the majority will be based in Honduras.  They will ‘conduct training and security cooperation engagements that are tailored to each partner’s needs,’ including the Honduran security forces, which routinely fire live bullets on teachers and other civilians during demonstrations.

Role of the IMF

The protests over health and education began in the context of negotiations between the Honduran government and the International Monetary Fund (IMF) to reach a new agreement to provide financing for Honduras. An IMF mission was in Honduras between April 22 – May 6, 2019 working towards creating the conditions for a new agreement with Honduras.[2] On May 6, 2019, Honduran media reported that a preliminary or roadmap agreement with the IMF was reached. According to the head of the Economic Cabinet, the process toward a final agreement would continue during the May and June.[3]

It was precisely while the IMF was in Honduras meeting with government officials to work towards an agreement that the Honduran Congress approved two new laws to restructure the health and education budgets, which were widely understood to mean privatization of health and education, despite those sectors already being severely underfunded and under-resourced.

Doctors, health workers, and teachers reacted by going on strike across the country. Because of the strength of the massive protests, Congress annulled the two laws and subsequently the Executive Branch annulled decrees related to health and education that were also the subject of protests. However, the government has refused to address the structural problems in health and education that have been at the root of the protests. Instead, it is carrying out a false dialogue with handpicked representatives while criminalizing and repressing those who demonstrate.

As Honduran economist Hugo Noé Pino and sociologist Eugenio Sosa wrote in a recent article: “The current conflictive situation in the education and health sectors in Honduras has its background in social policies since 2010. The budgets of both sectors have decreased during current decade. For example, spending on education by the central government was 32.9% of the total in 2010 and in the approved budget for 2019 it is 19.9%. Health spending was reduced from 14.3% to 9.7% in the same period.”[4]

The government has reduced labor rights of employees, for instance by contracting teachers on a temporary basis instead of hiring them outright, and some schools are practically falling down.  The situation in public hospitals is notoriously disastrous due to lack of equipment, medicine, and supplies, so bad that doctors report operating by the light of cell phones and there have been reports of newborn babies having to be placed in cardboard boxes or two to a bassinet.

The constant reduction in social spending combined with the increased cost of living is one of the factors that leads thousands to leave Honduras in hopes of working in the United States. Ironically, the head of the IMF Mission that visited Honduras celebrated that Honduras’ GDP grew in 2018 ‘supported by private consumption, which was driven by an important growth of international remittances’.[5] Indeed, there is no denying that the IMF and US-backed neoliberal policies of privatization and reduction of public spending benefit the economic elite and result in migration of the general population, and thus an influx of remittances upon which the economy will increasingly be based.

Hondurans have reason to oppose privatization of health and education based on their recent experience of privatization of electricity. Over the past decade, the IMF has pushed privatization of the National Electricity Company (ENEE). One of the ‘key components of the reform program’ outlined in a 2014 IMF report on Honduras is electricity sector reform, specifically ‘private participation in the key area of distribution’.[6]  Subsequently, distribution of electricity was shifted from the government company to a private company, the Empresa Energía Honduras (EEH). Since then, rising electricity rates have been a source of protest and discontent throughout Honduras, especially affecting poor and middle class families. (For more on the historical background on the privatization of the ENEE, read this article by Karen Spring.)

Currently, there are efforts to further privatize what remains of the ENEE. The head of the executive branch’s economic cabinet indicated that President Hernandez had requested he work on a ‘rescue plan’ for the electrical sector that would permit a new agreement with the IMF and this ‘electrical reform’ is reportedly one of the 5 components of the current IMF negotiations with the Honduran government.[7]

One of the reasons frequently cited to justify privatization of the ENEE is its deficit. What has been ignored in this discussion is the post-coup looting of the ENEE by awarding overvalued contracts to private businesses. This has become clear through recent cases presented by Honduran prosecutors backed by the OAS anti-corruption mission (MACCIH), who charged 10 people with defrauding the ENEE in relation to the Patuca III Hydroelectric Dam project[8] and also presented charges against case related to the ENEE contract in the Agua Zarca Hydroelectic Project.[9]  In the latter case, the MACCIH actually recommended revising all of the ENEE’s active contracts because there could be a ‘imbalance in the market that could result in the bankruptcy of the ENEE’ if all the renewable energy contracts were to have been done in the same way.[10]  In other words, the ENEE could be massively overpaying private companies for electricity production. Ironically, more privatization is being pushed as the solution.

Corruption and powerful criminal groups pervade Honduras. President Hernandez’s brother, Tony Hernandez, was arrested by the US in 2018 and is currently awaiting trial in New York for drug trafficking. Court documents recently filed in that case revealed a US Drug Enforcement Agency investigation of President Hernandez and others close to him, including SOA graduate Security Minister Julian Pacheco. Fabio Lobo, the son of former Honduran President Porfirio Lobo, was sentenced in the US for drug trafficking. Lobo’s wife, the former first lady, and numerous other current and former government officials are facing corruption charges in Honduras in cases filed by the anti-corruption unit backed by the MACCIH. One of those accused in a major corruption case has indicated that the looting of public funds for political campaigns was directed by the President’s sister on his orders.[12]  His lawyer, human rights defender Omar Menjivar, has further asserted that the President’s party has become a criminal structure and the president himself has been the primary beneficiary, suggesting that anti-corruption prosecutors have elements to press charges against Hernández.[13]

The MACCIH has come under fire from civil society for failing to prosecute the Honduran president and his inner circle despite public corruption scandals. Jesuit priest Ismael Moreno recently wrote ‘The MACCIH has the absolute obligation to present corruption cases linked to the circle of the current head of the Executive branch… By not doing so, they would evidence their complicity in the Almagro-JOH pact and the support of the (US) Embassy,’ referring to the notion that the OAS backed by the US reached an agreement with the Honduran president to install the MACCIH with the understanding that he would not be prosecuted.[11]

To date, Hernandez himself remains untouched and in power, backed by the US Embassy. Meanwhile, those speaking out and defending the rights of the population are criminalized, defamed, threatened, and shot at — including by US supported security forces.  The US bears responsibility for both the root causes of the current crisis in Honduras and the brutal repression of demonstrators.

[5] Translation of quote by Esteban Vesperoni, who led the IMF Mission to Honduras a reported in the Honduran newspaper La Prensa: https://www.laprensa.hn/economia/1281951-410/joh-fmi-acuerdo-honduras-enee-crecimiento-economico