On June 23, 2020, the U.S. deported Emmanuel ‘Toto’ Constant, a notorious Haitian death squad leader who was on CIA payroll, to Haiti, after years of protecting him from accountability. Constant led the brutal paramilitary group FRAPH, which killed, tortured, and raped Aristide supporters in Haiti in the years following the 1991 military coup. 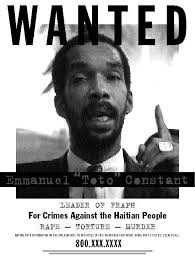 As the Center for Constitutional Rights details, Constant ‘was a leader of FRAPH during Haiti’s 1991-1994 military rule, which claimed the lives of an estimated 5000 Haitians and orchestrated a systematic campaign of rape and other torture, arson and executions against the residents of the poorest communities in Haiti.’  During a significant period of this time, Constant was on CIA payroll.

When Aristide returned to the presidency of Haiti in 1994, Constant escaped accountability by fleeing to the U.S. with the help of a U.S. visa. He lived freely in New York City, but he was recognized by members of the Haitian community who denounced his presence. Following their outcry, he was detained by immigration and was to be deported back to Haiti then — when he might have been held accountable. However, Constant threatened ‘to divulge details of his relationship with the CIA’ and suddenly was released from immigration detention. He continued living freely in the U.S.

In 2000, there was a historic trial in Haiti against Constant and others, including high ranking officials, for the Raboteau massacre. Despite extradition requests from the Haitian government, the U.S. again protected Constant by refusing to extradite him to Haiti. He was found guilty in absentia for the Raboteau massacre, yet, thanks to the U.S. government, he continued living freely in New York.

After Constant escaped accountability in Haiti, in 2004, the Center for Justice and Accountability and Center for Constitutional Rights filed a civil suit against Constant in the U.S. on behalf of Haitian women who survived FRAPH’s violence and rape. Constant was found liable for crimes against humanity and torture, including rape and the systematic use of violence against women and ordered to pay $19 million in damages. Subsequently, in 2008, he was convicted in New York for larceny and mortgage fraud and sentenced to 12 to 37 years. In April 2020, after serving 12 years he was paroled to Immigration and Customs Enforcement despite the sentencing judge’s recommendation that he serve the full-term given ‘the very real chance that defendant may be able to evade justice due to the instability in the Haitian judicial system.’ He was quickly scheduled to be deported but removed from a May deportation flight after CEPR published an expose. Numerous voices called for him not to be deported in the current context, fearing his arrival in Haiti could generate instability.

Yet, last week, the Trump administration sent him back to Haiti, where despite the fact that he was arrested and jailed upon arrival, many fear that he will not be held accountable given that supporters of the FRAPH are in high places in Haiti’s current regime. Given that Constant was convicted in absentia, he has the right to a new trial, which many fear could be a sham. Another of those originally convicted in absentia for the same massacre subsequently escaped accountability and is the assistant Chief of Staff of the Haitian Army. As Mario Joseph and Brian Concannon, who worked on behalf of the victims in the historic Raboteau massacre case, write in a recent Op/Ed, a new trial ‘now will take place under a government that consistently undermines prosecutions of notorious human-rights violators.’  They continue:

‘When former dictator Jean-Claude “Baby Doc” Duvalier returned to Haiti in January 2011, the government initially prosecuted him. But when President Michel Martelly assumed office that April, his prosecutors reversed course and convinced the judge to dismiss the case on the grounds that the statute of limitations had expired…

Even worse, thugs allied with Moïse’s administration lately have been carrying out attacks reminiscent of those by Constant’s death squads against similar civilian populations, with impunity, but on a smaller scale. We fear Constant could help scale up those attacks.’

SOA Watch stands in solidarity with the Haitian people and human rights organizations as they strive, yet again, to demand justice for those raped, murdered, and tortured by the FRAPH. We denounce the fact that the United States thwarted efforts to hold Constant accountable by refusing to extradite him for the original trial and instead deported him now, when FRAPH supporters are in powerful positions. We also know that the United States must also be held accountable for coordinating with and paying Constant while he was paramilitary death squad leader and for the long and racist history of U.S. intervention in Haiti that has repeatedly thwarted the right of the Haitian people to self-determination and resulted in massive human rights violations.