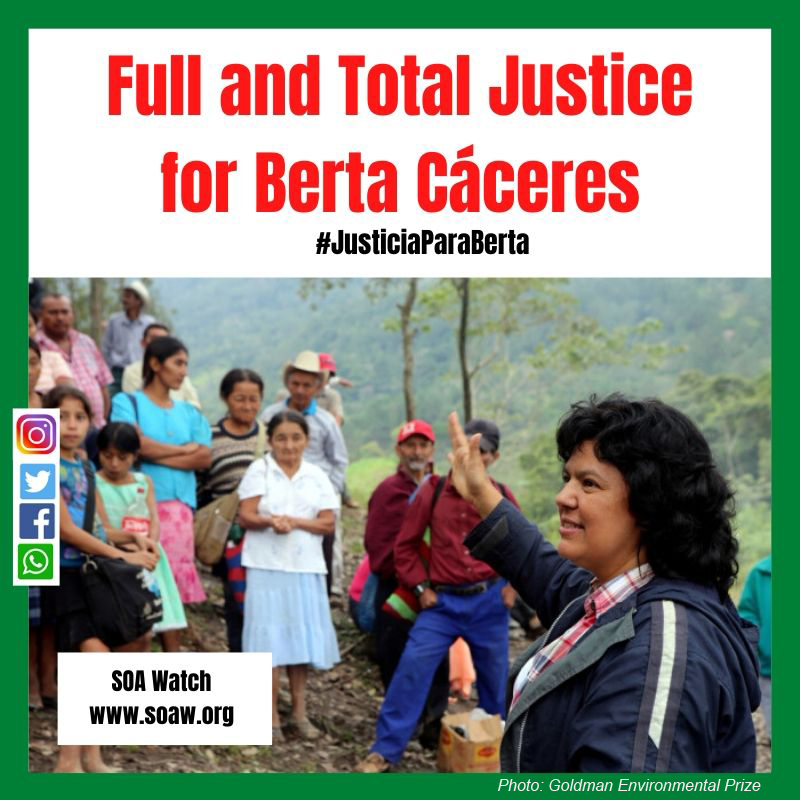 Today is the 4-year anniversary of the indigenous land defender and feminist leader, Berta Cáceres brutal assassination. Berta was the co-founder of COPINH and was murdered for her brave fight in defense of the indigenous and sacred territories of the Lenca People in Honduras. Before her assassination Berta and COPINH fought against the construction of the Agua Zarca Project, a damaging dam of the Energetic Development Company (DESA).

On December 2, 2019, a year after issuing a guilty verdict against them, a Honduran court sentenced seven men for the murder of the visionary Honduran social movement leader. Those sentenced were involved in the preparation and execution of Cáceres’ assassination; however, the intellectual author(s) of the crime, those who ordered and paid for Cáceres’ murder, are not among them. This means that four years after Berta Cáceres was assassinated, none of the intellectual authors of her murder have faced trial.

Undeniably, that the intellectual authors of this crime go unpunished does not lessen the responsibility of the intermediate and material authors for the execution of Cáceres’ murder. Continuing with the tradition of SOA graduates using their training to violate civilians’ basic human rights, among those sentenced are two SOA graduates: Douglas Bustillo, former DESA head of security, and Army Major Mariano Díaz. Díaz received training by the United States not only at Ft. Benning, but also received counter-terrorism training at the Inter American Air Force Academy in Texas, and was part of the the US-led war in Iraq. In addition to being an Army Major, Díaz worked as an instructor for Honduras’ Military Police and served as the head of military intelligence for Honduras’ First Battalion.
In keeping Berta Cáceres’ memory alive, we also uplift the many other activists, leaders, and human and land rights defenders who have been killed in Honduras since the US-backed coup d’etat in 2009. The two coup leaders were both SOA graduates: Joint Chief of Staff, Romeo Orlando Vásquez Velásquez, and the commander of the Air Force, General Luis Javier Prince Suazo. Since the coup, at least 160 social leaders and land and environmental defenders have been killed and 13 have been forcibly disappeared.
Unfortunately, most assassinated social leaders and land and environmental defenders in Honduras do not obtain any justice. A recent report by the United Nations Office of the High Commissioner for Human Rights (OHCHR) stated, “two years after the events [of 2017], no case of human rights violations has seen a verdict. The majority of serious violations documented by OHCHR, such as summary or extrajudicial executions and enforced disappearances, remain under investigation; several have not been investigated.” More concerningly, the report stated “[v]ictims found no support in accessing justice and several victims and witnesses expressed security concerns at participating in proceedings against members of the defense and security forces.”
Alarmingly, according to the report, “official recognition of the occurrence of human rights violations remains pending, as well as provision of adequate remedies to victims and their families and adoption of the reforms necessary to prevent the recurrence of human rights violations.” While this report addresses the investigation of human rights violations that occurred during the 2017 protests following the fraudulent presidential election, it is indicative of the lack of political will of the Honduran government to guarantee human rights and investigate and sanction human rights violations, as well as adopt measures of non-repetition.

Berta Cáceres has become the face of the killings of activists, leaders, and land defenders, but her tragic murder was neither the first nor the last in Honduras. Since Cáceres’ brutal murder, at least 27 land and environmental defenders have been killed in the country. She and all the other victims, their families, and all of Honduran society have a right to truth and justice. Four years after Berta Cáceres murder, we express our solidarity with her relatives, with COPINH, with the people of Honduras, and express our continued commitment to rejecting the impunity that continues to prevail in Honduras. We stand with communities organizing to keep their territories free of harmful megaprojects and continue to demand truth, justice, and guarantees of non-repetition!