“You can cut all the flowers but you cannot keep spring from coming.”  Pablo Neruda 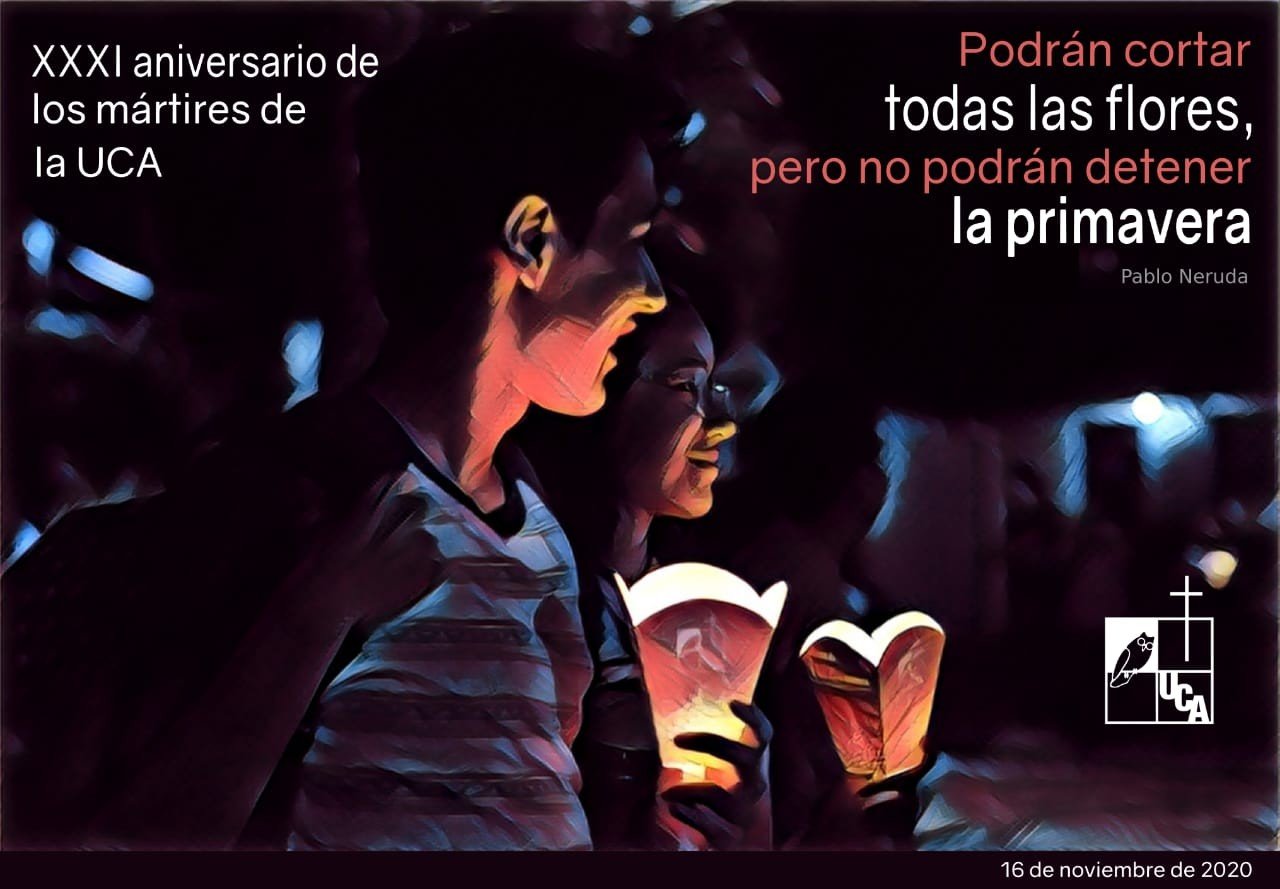 The SOA Watch movement initially formed 30 years ago to denounce this massacre — one of the many atrocities that occurred in Latin America as the United States funded civil wars and trained military at the SOA/WHINSEC. While we are unable to organize a mass in-person mobilization this year, we are committed to facilitating meaningful spaces to nourish our collective organizing and ongoing resistance. We hope you will join us this weekend for a Virtual Vigil, the third event in our Rooted in Resistance series. On Saturday, November 21st, we will facilitate three virtual panels about the historic and current impacts of US Empire throughout the Americas and the powerful movements organizing to defend autonomy and dignity of our communities. On Sunday, November 22nd we will be hosting our annual vigil, including presentes and litany and featuring the SOA Watch Musicians Collective. The weekend’s virtual events and spaces are free, bilingual (Spanish and English, interpretation will be provided) and all are welcome.

For 31 years, members of Salvadoran civil society and allies across the globe have organized for accountability and justice. In an important step forward this past September, a Spanish court convicted SOA graduate Inocente Montano, a former Army Colonel and Minister of Security in El Salvador, for the murders of the five Spanish Jesuit priests (the Spanish court could only convict for the murders of the Spanish citizens). Montano was part of a group of high-level military officers — including several other SOA graduates — who gave the order to ‘eliminate’ Jesuit Ignacio Ellacuría, rector of the UCA, for his work to broker a peace agreement to end the war in El Salvador. Nevertheless, no other member of the military high command has been prosecuted for ordering and planning the massacre. Not only has El Salvador refused to extradite members of the military high command to Spain (Col. Montano was extradited from the U.S.), but just last month, the Salvadoran Supreme Court ruled to end the investigation into the intellectual authors of the UCA massacre after a court reopened the investigation of six high-ranking military officers and a former president, Alfredo Cristiani, in 2018.

Furthermore, the US government in general, and the SOA/WHINSEC in particular, have never been held accountable for their role in training, financing, and empowering members of the military leadership who ordered the murders at the UCA. The US and SOA share responsibility for the 75,000 civilians killed and 8,000 civilians disappeared during El Salvador’s US-backed civil war. The important organizing for truth, justice, and the guarantees of no-repetition for the UCA massacre and all forms of US-led and supported violence against our communities continues together. To date, we estimate that more than 84,000 Latin American state forces have been trained at the SOA/WHINSEC in counterinsurgency techniques (i.e. civilian-targeted warfare). SOA/WHINSEC graduates, among which are also Department of Homeland Security agents — this includes members of the Border Patrol Tactical Unit (BORTAC), which has been involved in recent egregious acts of violence and oppression of civilian protests within the US — have consistently used these tactics to wage war against their own people.
As we  honor the memory of those killed by US-backed state violence, we remind ourselves that our obligation is to continue organizing and resisting — together we will close the School of Assassins and dismantle the structures of oppression on which it is based.
Celina Ramos, ¡Presente!
Elba Ramos, ¡Presente!
Ignacio Ellacuría, ¡Presente!
Ignacio Martín-Baró, ¡Presente!
Amando López, ¡Presente!
Joaquín López y López, ¡Presente!
Segundo Montes, ¡Presente!

PS
December 2nd marks the 40th anniversary of the martyrdom of the “Roses in December” martyrs, Dorothy Kazel, OSU, Maura Clarke, MM, Ita Ford, MM and Jean Donovan who were brutally murder by the U.S.-supported Salvadoran military after being labeled “subversives” for accompanying refugee families forced to flee the escalating violence and oppression that eventually led to civil war. On behalf of SHARE Foundation  and LCWR, we would like to extend an invitation to all to celebrate the gift of these four women and remember all of those who dedicated their lives to working for justice in El Salvador and throughout the world. They hope to commemorate the lives of the Roses in December martyrs by hosting 40 remembrances in 40 cities to mark the 40th anniversary. If you are able to host a vigil, evening of conversation and story-telling, or other gathering with your community to honor the memory of Ita, Maura, Dorothy, and Jean and those who continue to follow in their footsteps, please send the brief description of your local event to the SHARE Foundation (jose@share-elsalvador.org) to be counted among the 40.