While the year is winding down, SOA Watch has been busy scheming and dreaming about building and mobilizing a strong mass movement in support of autonomy and dignity for our communities and one that categorically demands accountability for US economic, political, and military intervention.

We will be sharing our vision for 2020 in the coming weeks, but in the meantime, we wanted to reflect on and celebrate a few of the things that we accomplished together, as we seek to create a more just world, uplift our communities and the environment, and challenge all forms of US-led and supported violence!

With your support in 2019, we achieved the following:

●   On the 30th anniversary of the UCA massacre, we uplifted the memory of the six Jesuit priests along with Elba and Celina Ramos, who were brutally assassinated by a US-trained and funded El Salvadoran Battalion during our November Commemorative Gathering at the gates of Ft. Benning, home of the SOA/WHINSEC. We also organized panels, raised our voices, and mobilized to challenge the continued training of Latin American and US state agents (Border Patrol and ICE) in civilian-targeted warfare. In word and in action, we recommitted ourselves to making our work embody the phrase, never again / nunca más by calling out and demanding an end to continued US training and support of Latin American state agents who in 2019 brutally facilitated a military coup in Bolivia and targeted civilian demonstrators in places like Chile and Colombia.

●    Collaborated with other organizations as part of the Justice for José Antonio Coalition in support of the victims of US Border Patrol to help finance and facilitate a trip to DC for the families of Sergio Adrian and José Antonio to attend the oral arguments in Hernández v. Mesa case at the Supreme Court – concerning a Mexican teenager, Sergio Adrian, who was killed by US Border Patrol on the Mexico side of the US border wall.

●    Produced publications and information in support of mobilizations happening throughout Latin America against the US-backed neoliberal model in places like Chile, Colombia, Ecuador, and Haiti.

●    Collaborated with researchers to write articles and produce information related to US support of, and involvement in, human rights violations throughout the Americas. We co-published a report about David Castillo, an ex-military intelligence officer who is facing charges as one of the intellectual authors of the murder of Berta Cáceres. We produced research and a webinar to denounce the US-backed military coup in Bolivia. We wrote an article exposing the training, increased militarization, and rampant impunity for crimes of Border Patrol and ICE.

●    Accompanied Honduran Indigenous rights organization COPINH in their efforts to seek justice for Berta Cáceres. Supported efforts to bring a lawsuit against the international bank that financed the hydroelectric project that two of those found guilty for Berta’s murder were associated with.

Our accomplishments in 2019 wouldn’t be what they are without you – our SOA Watch community! We hope, like us, you believe in how critical our work will be in 2020, and understand the need to increase our capacity to continue to build our collective power by hiring an additional field organizer. We are only short $6,000 to reach our goal of raising our $30,000 goal. If you have the means, please consider making a tax-deductible donation today of $25, $50, $100 or more – any amount truly helps!

Help Us Build Our Collective Power in 2020!

Our communities are under attack, and we need your support to build our collective power to end US-led and supported state violence! Will you consider making a tax-deductible donation of $25, $50, $100 or more so that we can increase our capacity in 2020 to confront all forms of US-led violence and uphold the dignity and autonomy of our communities? 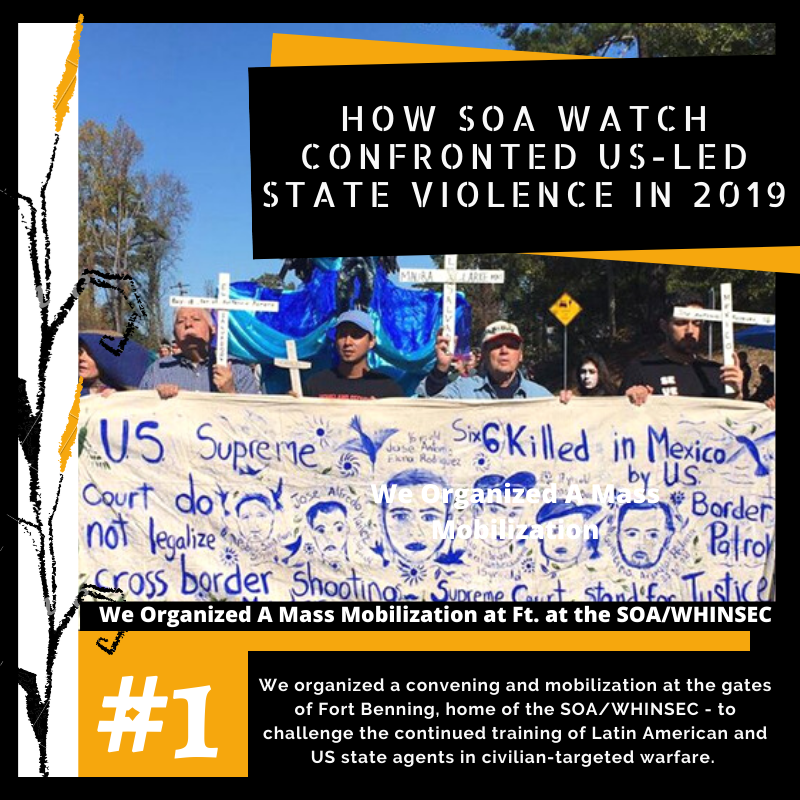 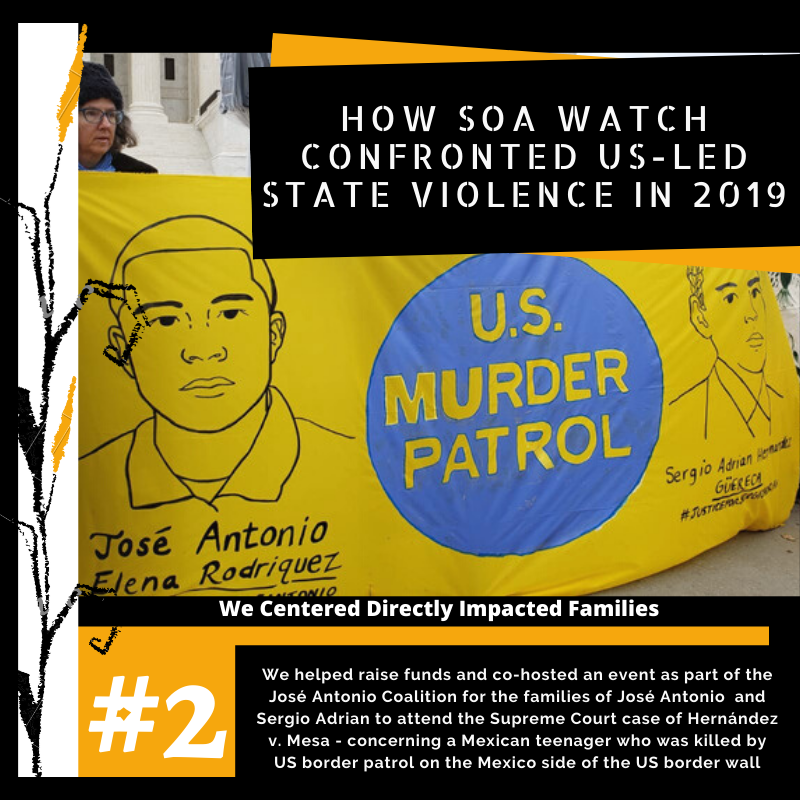 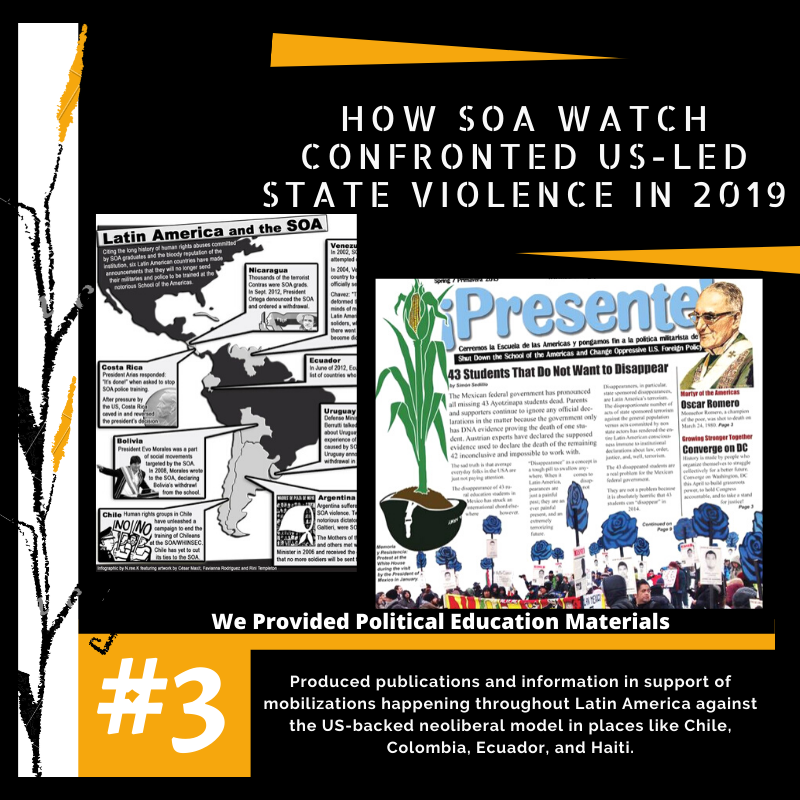 Check out the Right to latest edition of The Right to Live in Peace Magazine produced by SOAW Chile!