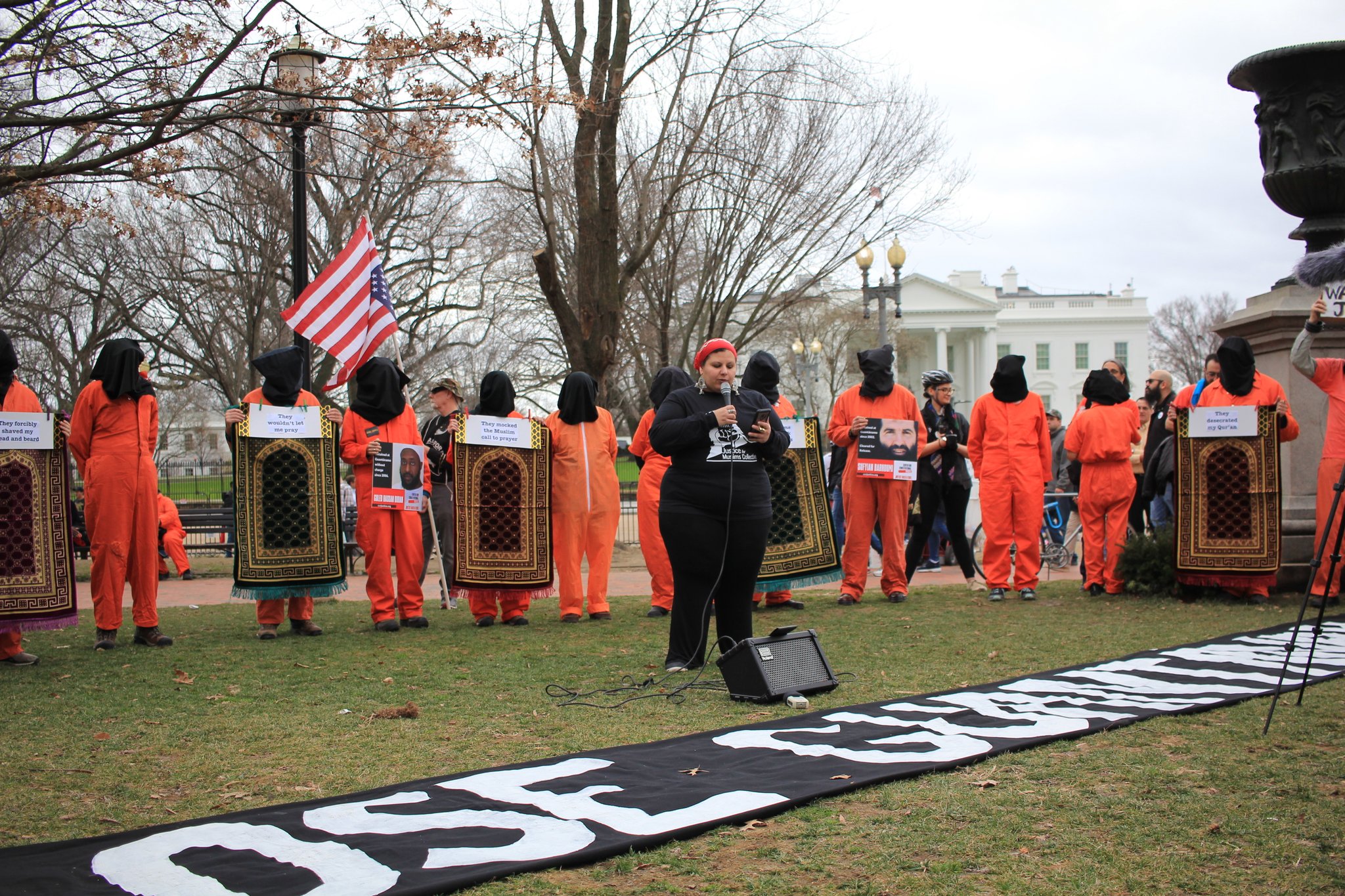 From the Muslim ban to the continuing proxy war in Yemen, the new era of the “war on terror” under the Trump administration has kept Guantánamo largely invisible. But two years since Donald Trump’s inauguration, there has been a host of cruel measures implemented under his leadership, despite his emphasis on other problematic policies.

Rather than becoming a relic of the war on terror, Trump has instead attempted to revive Guantánamo as a legitimate facility to incarcerate Muslim prisoners. As an institution that has long set the precedent for the mistreatment of Muslims suspected of terrorism, the urgency of addressing the perils of Guantánamo cannot be overstated. Moreover, 17 years after the first prisoners were brought to Guantánamo, it now risks becoming a permanent fixture of the endless war on terror, where human rights abuses remain unabated and where accountability is nonexistent.

Having detained a total of about 780 prisoners from when it opened to incarcerate terror suspects, the number has now dwindled to 40 after prior administrations released many of Guantánamo’s prisoners. Under Trump, however, rather than closing, Guantánamo may very well be expanding.

Keeping the Prison Open While Allowing for More Detention

Guantánamo was an issue that Trump addressed before he became president. During the 2016 elections, he stated that his administration would keep it open and “load it up with some bad dudes.” Though Trump hasn’t completed this threat, it hasn’t prevented him from making it repeatedly and with reference to specific individuals. When Sayfullo Saipov, an Uzbek immigrant, ran a truck into a crowd of people in New York City in 2017, Trump said Saipov should be treated as an “enemy combatant,” and that he would consider sending Saipov to Guantánamo — a prison reserved for the detention of Muslims and Muslims alone.

While no new prisoners have been sent to Guantánamo since 2008, Trump has threatened to send suspected ISIS (also known as Daesh) fighters there, and in June 2018, the prison was reportedly doing drills to prepare for new arrivals. The prison’s commander, Navy Rear Adm. John Ring, said that he hasn’t been informed of any new prisoners being sent to Guantánamo, but Trump’s 2018 executive order to keep the facility open allows for the transfer of prisoners into Guantánamo, making this possibility an even scarier reality. Coupled with Trump’s consistent stoking of fears of Muslims, Guantánamo may very well remain open indefinitely no matter how many legal challenges are brought against it. The fact that Trump may very well reverse years of releasing prisoners and reducing the prisoner population indicates that the administration thinks Guantánamo has not outlived its utility. Rather, Trump’s actions seem to signal the prison is critical to the detention of Muslims and the maintenance of a faux legal system designed to further institutionalize Islamophobia.

Though 731 prisoners have been released, many have faced the prospect of death behind bars — something that has become seemingly more likely under the Trump administration. In 2017, the news of hunger strikes emerged from the prison. Though not a new form of protest at Guantánamo, prisoners’ treatment by medical officers was. In the past, when prisoners were hunger striking, they were force-fed if their weight dropped below 85 percent of their normal weight. But under the Trump administration — at least in 2017 – the force-feeding of prisoners ended, with hunger strikers left starving and on the verge of death. While force-feeding is never the goal of hunger striking, prisoners often use it as a tactic to draw attention to their case and challenge their indefinite detention. In the cases that emerged in Guantánamo in 2017, death became a very real possibility in a prison that has been devoid of justice for Muslim prisoners since 9/11. Ahmed Rabbani, a Pakistani prisoner who has been held at Guantánamo since 2004 without charge or trial, said that, “I will get out of here one way or the other … either when I am freed from prison, or when I am freed from the bondage of this life, and I leave in a coffin.”

Keeping the prison open indefinitely means that older prisoners will likely find death behind Guantánamo’s walls. To account for the possibility of dying prisoners, the military requested $69 million to build, among other things, a hospice care facility. Though the funding has yet to come to fruition, the Trump administration’s clear intention is to institutionalize Guantánamo as a site of criminalization and punishment for Muslim prisoners until their eventual deaths.

For those languishing at Guantánamo, there has been little reprieve, save art classes where prisoners paint images representing not only the torture they experienced at the hands of the US government, but other works that seem to convey their conceptions of freedom, humanity and beauty.

A Crackdown by the Trump Administration

After a successful exhibit of Guantánamo artwork at John Jay College from the end of 2017 to the beginning of 2018, there was a change in military policy sparked by former Defense Secretary James Mattis’s office that disallowed art from getting released from the prison based on the idea that it was deemed to be government property. Going one step further, however, the military indicated that it was either going to archive or burn the artwork made by prisoners. Shelby Sullivan-Bennis, an attorney with the UK-based human rights organization Reprieve stated that, “There is only one reason the art is being censored now, and it is to keep up the pretense that all these people fit President Trump’s silly stereotype of ‘Bad Dudes’, a pathetic deceit of the world.”

While this policy may seem less consequential than others impacting Guantánamo prisoners, disallowing the artwork from leaving the prison is about denying and minimizing the prisoners’ humanity. This serves the distinct purpose of entrenching dominant images of Muslims as dangerous and inherently prone to violence — tropes that have been fundamental to implementing abusive policies across the board in the war on terror. Thus, the artwork is not only about stripping prisoners of their agency, but also about making sure the only constructions of Muslim prisoners that emerge are those which enforce their criminality and which serve to justify their detention without question.

Outside the walls of Guantánamo, the Trump administration, under former Secretary of State Rex Tillerson, eliminated the Office of the Special Envoy for Guantánamo Closure in August 2017. Many have focused on the inability to track those allegedly returning to fighting with/alongside terrorist organizations as cause for concern. However, this ignores the fate of the majority of prisoners who are innocent of any crimes and who have been released to third-party countries or repatriated only to experience resettlement/reintegration issues with no help from the US government whatsoever.

For example, in March 2016, two Libyan prisoners were transferred to Senegal to live there permanently. Two years later, both former prisoners were suddenly given notice that they would be deported to Libya — a country now in shambles. Months after the two prisoners were deported to Libya, they have not been heard from, and absent the envoy position, there appears to be no one with whom to register concerns or complaints.

Meanwhile, those who attempt to resume their lives with some semblance of normalcy continue to have significant issues with resettlement, in addition to physical and mental health concerns, essentially becoming “collateral damage” in the war on terror. Thus, prisoner disposability is an attitude that has wholeheartedly been embraced by the Trump administration, as evidenced by the lack of any support for released prisoners.

The injury to Muslim prisoners and Trump’s attitude of their disposability is also consistent with Trump’s approval of CIA Director Gina Haspel, who oversaw the first black sites in Thailand where two Muslim prisoners were tortured in 2002. Rather than being reprimanded for her role in torture, Haspel was instead rewarded with the highest rank in the CIA. With new allegations surfacing that Haspel may have served as chief of base at Guantánamo to run two black sites, there is more cause for concern that torture will continue unabated.

When viewed alongside other developments at Guantánamo in the last two years under Trump, the message is not only that torture is acceptable, but that it may very well return. For the 40 prisoners that remain in Guantánamo, this is a serious threat and one that is ever-present, considering Trump’s comments that torture does work, and that “if it doesn’t work, they deserve it anyway, for what they’re doing.”

After 17 years of operation, the Trump administration is backtracking on any positive developments that have been made in not only attempting to close Guantánamo, but to end torture and to help former prisoners rebuild their lives with some semblance of stability. This is unsurprising, given Trump’s overt animosity and antagonism toward Muslims. But Guantánamo’s geography makes accountability even less likely: it is located in a foreign land that is inaccessible to most, thus making human rights abuses easier to commit.

Guantánamo has always mattered, not only because of what happens behind its walls, but what it represents for the lengths to which the US government will go to criminalize the Muslim community. Under Trump, the length it will go is far — and there is no reason to assume Guantánamo will be an exception. In fact, it might continue setting the precedent for the abuse of Muslims as it has for the last 17 years.

No End in Sight: The Perils of Trump’s Guantánamo