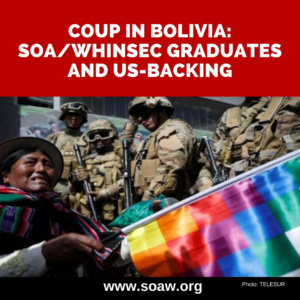 On November 10, 2019, two-time WHINSEC graduate and Commander of the Bolivian Armed Forces, General Williams Kaliman ‘suggested’ that Bolivian President Evo Morales resign.  General Kaliman’s statement came after post-election protests bolstered by a false narrative of election fraud promoted by the US-dominated Organization of American States (OAS), a police mutiny, and a vicious campaign of violence by the far right-wing against members of President Morales’ political party, the Movement for Socialism (MAS).  This included violent public attacks on MAS officials, burning their homes, and kidnapping family members.  As a result, Morales and all three elected officials constitutionally in line to replace him — Vice-President, head of the Senate, head of the Chamber of Deputies — all resigned, citing a coup d’etat.  The Mexican government sent an airplane to rescue Morales and granted him and other MAS leaders political asylum, which Morales credits with saving his life.

The United States promptly recognized Jeanine Áñez, a right-wing senator, as President of Bolivia when she declared herself as such in a Legislative session without a quorom where only minority opposition legislators were present.  In fact, the Bolivian Legislative Assembly, in which MAS holds a majority, had not even accepted Morales’ resignation, as is required for it to become official.  The US attempt to normalize the coup government has been paralleled in the corporate media, which has whitewashed events in Bolivia and created a narrative that legitimates Áñez as president.

As Indigenous people and others throughout Bolivia protest the coup, the US-backed de facto regime has been brutally massacring them, with approximately 30 people killed since the coup.  Áñez issued a decree granting impunity from criminal prosecution to military and police forces who kill and shoot protesters, giving the military and police licence to kill.  On November 15, 2019, a joint military-police operation opened fire on Indigenous demonstrators in Sacaba, killing at least 9 people and seriously injuring many, many more.  On November 19, 2019, the regime again massacred demonstrators, killing at least 8 people in Senkata.

At least 6 SOA/WHINSEC graduates played a role in the coup d’etat in Bolivia.  Two-time WHINSEC graduate General Kaliman was trained in a course for future military Chiefs of Staff and Commanders in 2003 and attended WHINSEC again in 2004.  WHINSEC’s training of future heads of militaries is precisely to establish a US relationship with high ranking military officials to advance US goals, with WHINSEC’s Commander recently expaining “the relationships they built here…it helps them get things done.”  The US ‘relationship’ with Kaliman was not limited to WHINSEC, but Kaliman also served in Washington DC as military attaché for Bolivia’s Embassy, as reported in this extensive investigation by Jeb Sprague on US connections to the Bolivian coup. Furthermore, Sprague found that:

‘Within the Bolivian police, top commanders who helped launch the coup have passed through the APALA police exchange program. Working out of Washington DC, APALA functions to build relations between U.S. authorities and police officials from Latin American states….The late Philip Agee, a one-time CIA case officer who became the agency’s first whistleblower, explained in his 1975 tell-all book how US intelligence traditionally relied on the recruitment of foreign military and police officers, including embassy attachés, as critical assets in regime change and counter-insurgency operations.’

Sprague also reports on leaked audio recordings published in the Bolivian press that reveal ‘covert coordination took place between current and former Bolivian police, military, and opposition leaders in bringing about the coup… coup plotters discuss(ed) plans to set ablaze government buildings, get pro-business unions in the country to carry out strikes, as well as other tactics – all straight out of the CIA playbook.’  At least 5 of them are SOA/ WHINSEC graduates.  This includes SOA graduate Manfred Reyes Villa, SOA ‘Distinguished Graduate’ General Remberto Siles Vasquez, 1998 SOA graduate Colonel Julio César Maldonado Leoni — who also served as an instructor at WHINSEC from 2001 to 2003, two-time SOA graduate Colonel Oscar Pacello Aguirre, and SOA graduate Colonel Teobaldo Cardozo Guevara.  The audios also show they understood they had the support of US Senators, including Marco Rubio.  To watch a webinar with more on the connections between the coup plotters and the US, click here.

The US and Bolivia’s right-wing have long wanted to oust Morales and MAS so that Bolivia’s resources, including lithium, can once again be plundered by multi-national corporations.  MAS has transformed Bolivia since Morales became the country’s first-ever Indigenous President in 2006, elected with impressive popular and social movement support.  Morales and MAS created a new Constitution, made Bolivia into a plurinational state, and dramatically reduced poverty and inequality, creating an Indigenous middle class for the first time. They nationalized or increased state revenues from resources that previously primarily profited transnational corporations, using this to significantly improve life for the great majority of Bolivians.  MAS governments opened hospitals and expanded access to medical care and education, dramatically reduced illiteracy, and increased the minimum wage.  In implementing economic policies that benefited the majority of Bolivian people, Morales challenged US imperialism and its institutions of neoliberal control such as the IMF and World Bank, as well as Bolivia’s right-wing elite.

In the process of carrying out and attempting to justify the coup, several narratives have been pushed and widely disseminated.  One narrative is that of election fraud, alleged by the right-wing even before the elections took place and then promoted by the US-dominated Organization of American States (OAS), bolstering weeks of post-election protests against the supposed fraud that were co-opted by the far-right.  The Center for Economic and Policy Research (CEPR) has done an extensive analysis of the so-called irregularities the OAS used to question the election results and found no evidence of fraud; morever they have concluded the OAS misrepresented reality.  Bolivian election authorities had reported that Morales had received slightly more than the 10% advantage required to avoid a runoff election; regardless, Morales even agreed to call new elections after the OAS report.

Additionally, much has been made of the fact that Morales was running for a fourth term based on a Constitutional Court ruling despite losing a referendum on the topic and other criticisms of Morales.  It has been widely written about that these factors resulted in discontent and a reduction of support compared to Morales’ previous landslide re-election victories (for context, a just over 10% margin of victory compared to his previous 37% margin of victory).  Of course there are critiques of Morales, as there are with any president, and in fact some social movements have criticized Morales for not breaking enough with the global extractivist economy.  However, how many terms a president can have and other issues are debates for the Bolivian people to have and resolve, NEVER justifications for US interference to help the far-right seize power through a coup.  The Bolivian people and social movements are fully capable of advancing the process of constructing the future they want; to claim otherwise to justify a coup and the imposition of a US-backed non-elected regime is racist and imperialist.

At the end of the day, the US-backed racist coup in Bolivia is not only against Morales but also against the Bolivian people’s process of self-determination and their right to determine their own economic and political policies.  It is this process that originally brought Morales and MAS to power.  Now, Bolivia’s Indigenous people and social movements are the targets of violence, being literally massacred in the streets by the police and military, and regime officials have threatened to detain MAS senators and arrest journalists.  The Wiphala flag, representing the Indigenous peoples of the Andes, has been burned.  Any possibility of democratic discussion about the future they want and the best way to construct it has been replaced by violence and racism, with a self-proclaimed far-right racist president who has literally said she wants to make Bolivia ‘free of satanic indigenous rituals’.

SOA Watch thoroughly condemns the US-backed coup in Bolivia and we stand in solidarity with the Bolivian people who are once again struggling against US imperialism and a far-right dictatorship, which seeks to return their country’s significant natural resources to multinational corporations and the elite for plundering, sink the majority back into poverty by imposing neoliberal economic policies, implement fascist and racist control, and deploy the military and police to murder with impunity.